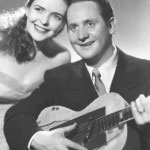 Two particle physicists are sitting at a bar discussing string theory.  Two guitarists are sitting close enough to overhear the conversation and one says to the other, “So … What kind of strings do you use?”

Dumb guitarist jokes are going to have to be rewritten now that Gibson is finally going to add an Ethernet connector to some of their guitars.  Gibson first mentioned their intentions to build a digital guitar with a built-in Ethernet port two years ago, but it looks like it’s about to become available. The new Les Paul will have a traditional 1/4-inch plug, but also be able to transmit sound via Gibson’s new MaGIC “digital transport technology,” which should work as far as traditional Ethernet would (about 100 meters). Unfortunately, this is a sneak peak of a sneak peak, as the February announcement is preceding a late 2005 launch.

Gibson’s CEO calls this a “whole new platform.” We’ll see. To me, it sounds like Musical instrument manufacturing is now just 10 years behind the times.