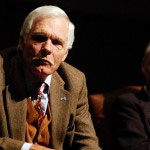 You just never know what Ted Turner is going to say. Today, he was into world politics and mentioned that “… several thousand unguarded nuclear warheads posed the biggest threat to our safety. Voting for the AOL/Time Warner merger was the biggest mistake he ever made. The $1,000 Social Security check he receives from the government is very helpful, since at his advanced age, he is basically unemployable. He likes his new restaurant business and we (you and I) should all experience the taste and health benefits of Bison Burgers.”

We also learned that “Israel is the biggest obstacle to world peace …” Boy, if we could only figure that one out! “Global warming and the related extreme climate issues are on his top ten list.” And, of course, “… media conglomerates are just wrong.” Ted told us that he played every loophole he could while at the helm – but now, “he’s a changed man.”

As a child he wanted to be “Alexander the Great … not the one in the movie … the real one.” But his years of military school and service in the Coast Guard have caused him to think that “war has no place in the 21st century. Why spend $200 Billion to destroy Iraq only to spend another $200 Billion to rebuild it!”

Ted’s best line of the day came when he was asked about his legacy. He said, “I’ll tell you what I’m going to have written on my Tombstone: I have nothing more to say.”

Oh, yeah … I almost forgot. Ted’s best quote of the day! “Fox News Channel is the propaganda arm of the Bush Administation.” Thanks for the heads-up, Ted.

I don’t know any other way to put this … Ted is my hero!