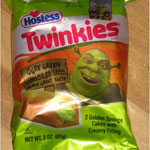 The Center for Science in the Public Interest CSPI, citing the childhood obesity epidemic, has called for food and beverage makers to dramatically cut back TV advertising of junk food to kids, reduce product placements and end product tie-ins like Twinkies with yummy Shrek “ogre-green” filling.

Are they right?  Advertisers will tell you that spot television is less effective now than ever before.  It is hard to reach an audience and even harder to measure lift from any specific ad campaign.  The old saw, “… 50% of my advertising works, I just don’t know which 50%.” is still heard in the hallowed halls of big brands.  And, in my consulting practice, I am treated to a daily chorus of “:30s are dead, what’s next.”  This mostly from people who can now measure things more accurately than they could in the past.

But, the data says something else.  The Henry J. Kaiser Foundation says America’s children are now spending a remarkable 38.5 hours each week consuming media (TV, video games, etc.)  And kids with TVs in their bedrooms watch 4.6 hours more TV weekly than their counterparts without this luxury.  According to one source, kids see about 20,000 ads for food each year – 90% of which feature food that is high in fat, sugar and salt – nutritionists call it “junk food.”  America does have the lowest cost per calorie on earth, so our kids have a better chance of buying cheap calories than do kids in other cultures.

As someone who has struggled with a weight problem my entire adult life, I can tell you that seeing the beauty shots in a Taco Bell ad make me salivate.  Yum, yum!  They don’t have me thinking “outside the bun,” but they definitely get me thinking outside the low fat, low carb, no sugar, no wheat products, if it tastes good, spit it out diet that I’ve been on for 30 years.  Although I’m not a kid, I try to act like one as often as possible so I can see the danger of these commercials. Let’s face it, no Taco is safe when I’m in the room!  However, I am also a father of three and I can tell you with authority that parents and home life are the first, foremost builders of good diets, good habits, good work ethics and healthy kids!

We can’t blame people or companies for aggressively marketing legal products that people buy legally.  We can’t blame the doctors or the FDA for creating and teaching a carb heavy, processed food-laden nutrition triangle for half a century that is scoffed at by contemporary medical and nutrition professionals.  And, we can’t blame TV for doing its job of informing, enlightening and entertaining.  Who can we blame?

We’ll, let’s start with organizations like CPSI who think that we need to blame someone!  How about a new concept: Freedom of choice and responsibility for your own actions.  Just because something is available, looks tasty or otherwise appealing doesn’t mean that partaking of it will not come with consequences.  Not to get to philosophical, but in a culture where “The Daily Show” and “Extra” and similar tabloid shows are considered by their audiences as primary authoritative news sources, junk food ads may not be the problem!