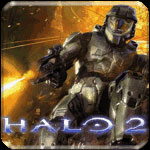 This article by Seattle Times technology writer, Kim Peterson, tells you some of the facts about Halo 2 and Microsoft’s unusual plans to make it into a movie.  This is an interesting twist on the concept of line extension.  Most video games that have tried to cross over into linear story telling have enjoyed less than stellar box office performances to say the least.  Many people like to say, “don’t judge a book by its movie.”  I wonder if this holds true for video games as well?

Microsoft may finally be getting into a business where “blue screen of death” could actually be a good thing.  The company is going from writing code to writing a movie script adapting the “Halo” video-game franchise, according to a report yesterday in Daily Variety. It’s wrapping up a million-dollar deal to hire Alex Garland, the writer of the movie “28 Days Later” and the novel “The Beach,” to bring “Halo” to the big screen, according to the report.

Variety said it confirmed the deal with Creative Artists Agency, which represents Microsoft and Garland in Hollywood. The agency hired Xbox co-creator Seamus Blackley in 2003 to represent video-game makers in Hollywood deals. Microsoft would not comment on the matter yesterday, except to say that “Halo” is a hotly sought-after property in the entertainment world. It added that it has not made any official movie announcements.

“Halo 2” went on sale in November and became the second best-selling game in the United States last year, losing out only to the latest installment in the popular “Grand Theft Auto” video-game series. “Halo 2” has sold 6.4 million copies worldwide since its release, bringing the sales total for both “Halo” games to 12.8 million units. The original “Halo” went on sale in 2001.

According to Variety, Microsoft is planning to develop the script on its own and take it to movie studios only after it is complete. Such a move in Hollywood is unusual for a tech company, the report said.

Microsoft likely wants to make sure that the “Halo” brand isn’t diluted, said Matt Rosoff, an analyst covering the company at Directions on Microsoft, a Kirkland-based independent research firm.  Alex Garland has reportedly been hired by Microsoft.  “This is one completely new piece of intellectual property that Microsoft owns, and because of that they want to make sure they have control over the image,” he said. “They’ve created this valuable franchise and there aren’t many of those out there.”