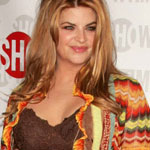 Those who have been looking forward to Kirstie Alley’s comedic role in “Fat Actress,” the new seven-episode reality-based series about her experiences as a woman who doesn’t meet Hollywood’s age and weight requirements, will have two viewing options when the first episode is shown next month. Showtime Networks announced yesterday that it would team with Yahoo to stream the episode simultaneously with the New York premiere on March 7 at 10 p.m. This will be the first time Yahoo has introduced a full television show, and the first time a show will be available free on the Internet. (The WB network presented “Jack and Bobby” to AOL’s paying membership in September.) “I think it’s the widest reach for a complete television program for anyone who can type Yahoo.com and has the access to the Internet,” said Showtime’s president of entertainment, Robert Greenblatt. “They can’t download it, but they can stream it.”

Welcome to the beginning of the new television era. Nobody has any idea what will work and what won’t so let’s try everything! I can give you a zillion reasons why this is a bad idea. For example, it presents the worst attributes of traditional television on the Internet, abuses consumer permissions, takes an emotionally satisfying experience (on couch in front of set with beer) and makes it unsatisfying (at desk in front of computer – beer optional), the list goes on and on …

However, I can give you one great reason why this is a good idea – it may work! Kudos to the folks at Showtime and Yahoo! for a brave, interesting consumer test. We may not all watch the show, but we will definitely watch the results!