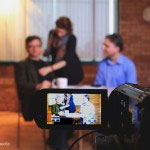 The pilot episode came out great!  Many thanks all around, but that is not the subject of this article.

Shooting a talk show in HD (High Definition television) came with a unique set of production problems, including:

Hair and Make-up:  A usual talk show budget includes a hair and make-up person or people depending on the number of guests and the host’s preferences. The average time to make up a guest is pretty well known and you can find hundreds of competent SD (Standard Definition television) tested professional hair and make-up artists to do the work.  The resolution in HD is so fine, that you need to do make-up that is as even and perfect as you would for a film but can work in a TV lighting environment.  In short, it has to look like you’re not wearing make-up.  We were lucky enough to have leslie Shreeve on set, and she was able to find the perfect balance between fast and right!

Framing: 1080i, the resolution for the flavor of HD we were shooting has an aspect ratio of 16:9 (16 units long by 9 units high).  As you well know, most SD television sets in consumer households have an aspect ration of 4:3 (4 units wide by 3 units high).  The show is going to be seen in both SD and HD so the answer is simple, frame for 4:3 and don’t worry … right?  Well, not exactly.  A two shot (a shot with two subjects) in SD is a three shot (a shot with three subjects) in HD.  A CU (close up) in SD is a two shot in HD.  See a pattern here?  The compositional choices for the director are no longer simple.  A properly framed cover shot (a shot covering all of the subjects) in 4:3 is a very, very loose cover shot in 16:9, and of course a properly framed cover shot in HD will be missing several of the subjects when viewed in 4:3.  Once again, we were very lucky to have one of the most experienced directors in the business, Bryan Russo, working with us.  But the choices and the techniques were unique to the medium.

Actually, I learned enough about the difference between the 4:3 world I grew up in and the 16:9 world we now live in yesterday to write a book about the opportunities and challenges of shooting talk shows in a bi-format world.  At the end of the day, we had a show that looked spectacular.  HD is extremely impressive and the crew at 11 Penn Studios was equally as impressive.  Jeff Friedman’s staff knows HD and they know it well.  Will Advanced Media Today find an audience?  I hope so.  But, one this is for sure – those who do tune in will be treated to an up close and personal view of the extraordinary production values of HD.