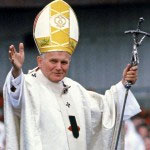 Utilization of the digital tier with this kind of technique is becoming more commonplace.  And literally dozens of local broadcasters are using the digital tier to help cut costs while complying with FCC regulations.

Here’s the part that interests me.  Why didn’t the station stream the Pope’s funeral over broadband?  Wouldn’t that really have made sense? … a branded environment surrounded with links to more information all brought to you by your friends at WCTV News.  Off the record, there are some people at Viacom that are thinking that way right now – but it isn’t happening just yet.

With all of the focus on IPTV (Internet Protocol Television) these days, it is refreshing to hear about the other digital television that is also about to become mainstream.  Hey, technogeeks – let’s get a view from 1000’ – view from field may be too tactical.