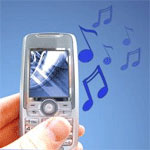 The keynote was interesting and the panel discussion echoed the overwhelming theme of the evening — we’re all willing to try anything that might make us some money — piracy is bad!

There is an astounding array of mobile software products available from mastertones (Audio samples of the most recognizable part of your favorite song – aka “the hook.”) to ringback tones (The much hyped, big in Korea, use of songs to replace rings when you call someone – they choose what you hear and they pay for you to hear it.)  All in, there must be 20 categories of music-based mobile phone products available and, like I said, everyone is willing to try everything.

There were the obligatory charts and graphs touting robust sales growth in certain areas of the business, but they were not adjusted for reality.  Yes, there more cell phones than CD players or television sets, yes the goal of the wireless industry is a phone for every person on earth, yes the music on portable devices is going to be a growth business … we get it.

There was, however, a faint hint of fear casting a pall over the evening’s presage.  It could be summed up in the form of an unasked question … “what about the fact that cell phones are just little computers?  Won’t they be hacked or worse, re-designed or disintermediated by yet other, more consumer friendly technologies.”  The music industry answer would be, we don’t care as long as we can keep doing our switch your library to our new form factor trick.  Except — as well understood by the very smart people on the panel —  once a song is a file, there are no more form factors to sell.

VoIP enabled phones, WiMax or WiFi phones, EV-DO phones with VoIP … they’re all coming and soon.  And, whatever a media center is, the management of your files is going to become a big business.  Transferring your CD’s and DVD’s to files is simply time consuming, but buying the files is expensive.  After you spend a buck for a song for your mp3 player and $3.95 for the ring tone and $4.99 for the wall paper of Ms. Lopez, how happy will you be when you can’t transfer your library to your new mobile device on your new carrier?

This nascent business is going to zig and zag for a while.  Big music is going to do just fine.  That being said, there are countless ways to exploit or profit from the probable futures of wireless content: Where are you going to set up your tollbooth?