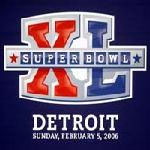 Tweet Article Share Article on Facebook Email Article Share Article on LinkedIn
On February 5, 2006 the ABC Television Network will broadcast its seventh Super Bowl live from Detroit’s Ford Field.  Since the 10 most-watched television broadcasts in history have all been Super Bowls, one can assume that this year ABC will also enjoy a very large live audience.  Last year’s game was viewed by 133.7 million viewers.

ABC will shoot the event in HDTV (High Definition Television in 720p format – a screen resolution of 1280×720 pixels) and for the first time, more than 50 percent of the ads will be presented in HD as well.  According to a recent study done by SA and Leichtman, over 56 percent of the people who bought HDTV sets (close to 9 million people) have not acquired the equipment needed to actually watch anything in HD. But that’s not the point! For the people who can view the content in HD, the experience will be breathtaking.

To be as untechnical as possible, using compression, a 720p HD signal can be reasonably streamed using IP (Internet Protocol)  at about 8 mbps (million bits per second).  The average broadband connection is 1.5 mbps down, so HD using an IP provisioned system is not possible in an average broadband household. In fact, watching HDTV using an IP system is only practical in a household with a broadband connection in excess of 10 mbps–know anybody who has one?

OK, how about dropping the resolution to Standard Definition (SD)? Nope!  For full-screen, full-frame rate SDTV you still need about 3 mbps sustained bandwidth.  What about half-size?  You know, a classic 320×240 streaming media window  — that will work, right?

As you probably know, the Super Bowl will not be distributed using IP Video.  ABC has the exclusive rights to broadcast the show domestically.  But, even if there were no business rules to prevent it, the public Internet could not handle 133.7 million live streaming viewers watching an event at the same time. Not even at 320×240.

Television is a pretty good television experience.  It provides excellent quality pictures to the largest number of receivers for the lowest possible cost. (Broadcast television reaches 99 percent of the population; total Internet users account for just 68.5% of the population, and only two-thirds of those users have broadband connections.)

In this case, the Super Bowl is not the exception that proves the rule.  Any prime-time show attempting exclusive Internet distribution would “crash” the Internet.  It just was not built to efficiently distribute 10 million high bandwidth streams simultaneously from a single source.  To be sure, IP Video will play an important role in the future of video communication. But for now (and the foreseeable future), television is going to the best place to watch television.

A note to my techno-geek friends: this is a non-technical article using the minimum amount of geek-speak possible to illustrate a business reality, so please hold the technical e-mails until next time.