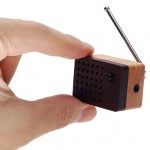 Tweet Article Share Article on Facebook Email Article Share Article on LinkedIn
When was the last time you went into a Best Buy and asked to see their Radio Department? That brilliant, but rhetorical, question was posed by Larry Rosin, co-founder and president of Edison Media Research at a Bill Sobel breakfast entitled, “The Future of Radio: 2007 and Beyond.”

Larry was responding to a question about HD Radio adoption and his point was that nobody is going to care about it until the technology is incorporated into every radio you buy. Today, you would be hard pressed to find an FM-only radio. Almost every radio you come across is both AM and FM. He was making the assumption that, sometime in the future, every radio will be AM/FM/HD/XM/Sirius. (Like TV monitors that now play all popular formats.)

Where and how we consume radio content is well researched and I won’t bother you with meaningless statistics. Suffice it to say that a well-run radio station is still a very cash flow positive business and I don’t know any poor radio broadcasters. This will probably be true as long as they keep putting AM/FM radios in cars and as long as people have to drive to and from work.

First, it’s important to keep in mind that no one listens to only one thing. Everyone likes a bunch of stuff and that includes local, regional, national and global content. To say that local radio’s power is the fact that it is “local” is a circular argument that leads nowhere.

Local content is only valuable if it is not commoditized. For example: time, temperature and traffic information can be had from several sources in every major market. And, in a very short period of time, every car owned by a commuter with a GPS system will either subscribe to some form of integrated real time traffic information or get it free with their system. The cost of the real time traffic service used by BMW navigation systems is built into the cost of the car. They use a version with FM data transmitted by Clear Channel’s Total Traffic Network. BMW calls it RTTI (Real Time Traffic Information). It’s unbranded raw information that the car synthesizes into useful knowledge about how to get you where you are going with the least amount of traffic. This is only one of dozens of different technologies that you could use to get real time information into your car, others include: CDMA, GPRS, ATSC, WiFi, WiMax, Satellite, etc. The list is not endless, but it is long. And with the plethora of new wireless networks being planned, it will not be long before the technology of radio is seriously under siege.

Most cars have clocks and thermometers so time and temperature are commodity items. And traffic information will soon be as well. What local content is not commoditized? Sports scores? Local news? There are lots of places to get all of that information wirelessly other than the radio. I subscribe to several text alerts for emergent news and information as well as for real-time scores for the teams I follow. For the most part, the services are free. Free is not a good commercial business model. Ad-supported must accompany free-to-consumers — it’s a formula radio knows only too well.

How about music? Well, since local radio can’t customize playlists for each listener, the music they offer is only value-added if it is programmed in a unique way with excellent creative and production elements surrounding it. This is the art of all radio and when you hear it, it makes you smile. Sadly, creating this kind of experience is very expensive and not many local radio stations are up to the task.

So where does this leave the radio business for 2007 and beyond? The challenge is “transition” and it is the same challenge facing the television business. Consumers don’t really care if they get their traffic information via radio signals, wireless data, digital audio, smoke signals or carrier pigeon. They just want to know the best way to drive home. And people don’t care, and don’t really care to know, how they receive their content. Ask someone (a consumer, not someone in the media business) how a television works and how it is different from an IPTV system or a QAM-based cable system — you’ll receive a blank stare as an answer.

This is the strength of radio for the near-term future, simplicity, ubiquity and inertia. Cars come with radios, so do clocks. When cars start coming with wireless Internet connectivity and when enough people own them, radio as we know it — the propagation of RF signals in the AM and FM bands — will die. What will replace it? Nothing. Consumers will have alternative means of consuming the very same content on, what they perceive to be, very similar devices.

And, how will big media deal with the transition? This is where the radio business may be most illustrative of the future of the media business. If big radio figures out how to stay profitable, big TV will certainly follow. It’s way too early to eulogize radio, but the technology is older than it looks.