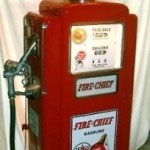 Tweet Article Share Article on Facebook Email Article Share Article on LinkedIn
We’d been on line for over an hour. It was a Tuesday, which was an even numbered license day. There were just two cars in front of us now. Maybe 10 more minutes and we’d be on the road. The station manager walked right by us, he was being jeered and booed by the other potential patrons (30 or 40 cars) lined up behind us. Then he put up the sign.

Maximum 10 gallons and your gas gauge must read under ½ a tank.

That’s not fair. It’s Tuesday, cars with even numbered license plates get to fill up on Tuesdays! That’s the rule.

The crowd was angry; they started throwing stuff at the gas station guy. It was awful. Luckily, if you can think of it that way, I had less than half a tank – I don’t know what I would have done to this guy if I had to leave the line.

If this sounds like fiction or a bad dime store novel about the post-fossil fuel future, think again — it was January 15, 1974. I was behind the wheel of a stylin’ 1970 Cadillac Coup de Ville (which got about eight miles per gallon) and it was my turn to wait on the gas line with my Mom’s car.

The “gas crisis” as it came to be known, lasted a few months between 1973 and 1974. It truly sucked. Gas prices doubled (and never came down). There were shortages where I lived and in many other places as well. We were asked to sacrifice, asked to spend and we became keenly interested in alternative energy.

Sadly, the interest (at least on a national level) didn’t last. Somehow the political landscape changed and gas supplies returned to normal. The Esso station was renamed Exxon and they started sending little plastic gifts to incentivize you to buy gas from them.

Fast-forward 33 years and, to quote Yogi, it’s déjà vu all over again. Oil is approaching $100 per barrel and we’re hearing talk of inflation. The dollar is so weak; you need to take a bank loan to buy a Subway sandwich in London.

But it’s really not like the ’70s. No one in America has really felt the pain of Global Warming, gas shortages or heat-oil rationing. Prices have gone up, to be sure, but on a per capita basis, energy is still less expensive today than it was back in 1974. Oil is not in short supply (although we may only have a 50 year supply left) and the fuel companies have posted record profits.

So, what’s the problem? Well there are hundreds of complex issues that will have a dramatic impact on the quality of our lives over the next hundred years, but we don’t have to worry about them. Leave it to NBC to come up with a single-issue fix. A fix so easy, all of us can copy it — turn down the lights. I’d love to write a rant about their “Green is Universal” initiative, but I will not do a better job than Jonah Goldberg did in the NY Post last week.

What I want to bring to your attention is the challenge and the opportunity of “green.” From a content perspective, green is boring. We live in a soundbite society and green needs to be explained. It takes more than a second to describe the best way to minimize your carbon footprint. It requires more attention than most media companies can aggregate and it has the very real potential to put viewers to sleep. When you add the problem of superficial, fraudulent green messaging to the mix, we find ourselves in a soup of greenish media from which we must escape.

My concern about this issue is genuine. I personally believe what I was taught as a kid: we only have one planet and, if we don’t take care of it, we won’t have any place to live.

So, what to do? The first thing we need is leadership. We can’t have every network, blogger, media outlet, portal, social network and grocery store declaring that they have “the” answer. The world we live in is so complex and the issues surrounding the environment are so large-scale, there is no “the” answer. Green thoughts are nice, but the issue should not be used as a punch line. Is there any reason that the only scientist most people can name is their local meteorologist? We’re in the media business – this has to change!

How can for-profit corporate marketing and promotional campaigns that offer single-issue, soundbite solutions be taken seriously by anyone? When “green” is completely trivialized, we are all going to be in serious trouble. Now is the time for corporate citizens in the media and industry alike to partner with government and actually solve some problems.

Are we really going to run out of water before we run out of oil? I’m absolutely the wrong guy to ask, but it sounds like an important question. Google it and let me know what you find out. This will give you some insights into the “lots of information, no knowledge” problem that needs to be solved.

We are living in a time of unprecedented communicative power. This would be a great time to use the mass media, the Internet and all of the associated technologies to make the world a safer and healthier place. Let’s make science important. Let’s use the power of the media to inform, enlighten and entertain. Let’s create some content that is compelling, relevant and, most importantly, engaging. Let’s not be greenish; let’s be True Green. If we don’t get there, we may have to wait on gas lines again, but that will be the least of our problems.