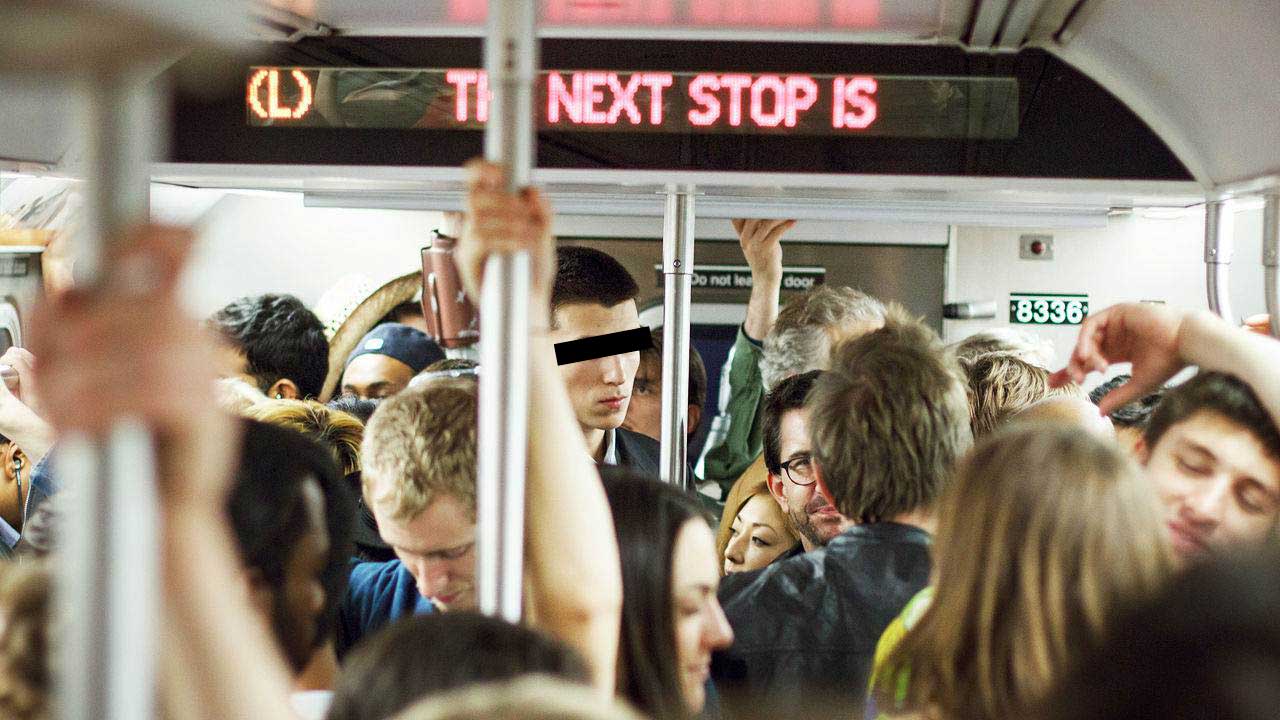 If she had a “type,” he’d be it. Tall, like her. Dark hair, broad shouldered, well dressed and well teched. It looked like he hadn’t shaved for a couple of days, but any uptown girl could tell that this was just additional proof of a refined fashion sense.

It was just a chance encounter on the subway. She noticed he had a blackberry and an Apple iTouch which he checked out only slightly less often than he checked her out. After a few stops, he walked out of her life. She didn’t think about it again.

Then, just yesterday, she found herself on the subway platform only a few feet from him. He recognized her and positioned himself just close enough to get into the same car. For five stops they simply looked at one another and smiled. Nothing was said, as you can imagine, nothing needed to be said. There are few things as powerful as a look and a smile.

As the train approached the station, she knew what had to be done. It could be months before she’d see him again. Maybe that was OK, maybe not. What would he think of her if she did it? Would he ask her first?

The screeching brakes and slowing train made her decision for her. Finding courage she did not know she had, she handed him her business card. Walking out the door, he turned, looked at the card and said, “Nice to meet you Janet, I’m Pete.”

What an awesome day!

After work, as she was walking home from the subway her cell phone rings. It’s Pete. He’s walking home too. They meet at the corner. He tells her how impressed he was that she gave him her card and they make the most important small talk they will ever make. They talk about their pets, (check out his nurturing sensibility), work – (yes, he makes a good living, he’ll be a good provider), hobbies … (he’s well rounded, and interesting), this truly is an awesome day.

Then, Pete, this polite, seemingly shy gentleman, suggests that they become friends on Facebook before they meet again. To Janet, a millennial who could pass for a digital native, this seems like a perfectly reasonable request. As they go their separate ways, they agree to continue the relationship online.

Janet was on cloud 9. She couldn’t wait to go out with Pete. This had all the makings of a great New York love story. She didn’t know who to call first: her Mom, her best friend from back home, yep, this was an awesome day.

When she got to her apartment, Janet rushed to her computer to check out Pete on Facebook. Maybe she typed his name wrong – this couldn’t be him. Staring at the computer in utter disbelief, she tried to reconcile the man she had just met this evening with his profile. Here were pictures of Pete in a wet speedo with his junk on display. He obviously had a girlfriend, she was gorgeous. In fact, he had dozens of pictures of himself (almost always shirtless) with super hot girls all over him. And what was up with the tight speedos?

But that wasn’t the half of it. Pete’s private profile was under an alias and it featured some details that went so far beyond TMI, Janet had to stop for a minute to compose herself. First, Pete was almost 15 years older than he looked, or acted. He liked to frequent the kind of clubs nice girls from the Midwest have never heard of and, the cherry on the cake of her day, was a picture of Pete in a thong, with tape over his nipples wearing a dog collar.

Two more clicks revealed that his favorite sexual position was Cowgirl and his stripper name was Cinderella Goldstein (not bad, if you ask me).

Heartbroken, Janet (not her real name) called me to tell me the story. “It’s backwards,” she giggled. “I’m supposed to meet a guy who’s too good to be true online and he’s supposed to turn out to be a freak in person. Not the other way around.” She shared some of his pictures with me online and, to be honest, they were hysterical. Out of context, of course. Secretly, I think Janet was crushed by the experience.

There’s not much more — it’s just a love story for our time. Boy meets girl, boys asks her to be Facebook friends, boy turns out to be a S&M freak with a coterie of other like-minded friends, boy invites girl to get naked and freaky with him. Yep, just an average analog love story with a bizarre digital ending. You know, you just can’t make this stuff up.

On the other hand, this isn’t the only “hard to believe” analog to digital love story this week. Former NYS Governor Elliot Spitzer found out how unfortunate life can be on the business end of a digital investigation. My heart goes out to the Governor’s wife and his children. I know they are in pain and I mean them no disrespect, but – there is no reasonable expectation of privacy online. If you use a computer to do something, you leave a trace. If you convert your voice to electronic signals by using a telephone, you leave a trace. If the device has an on/off switch and you use it to do something, a motivated hacker will figure out it was you. When you logon to your bank account over a secure connection, someone, somewhere, knows that you are online and has complete access to your transaction. It may be a bonded bank employee protecting you or a government investigator trying to entrap you – you have no way of knowing – it is one of the immutable laws of the digital age.