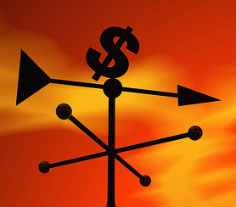 With the recent collapse of three of five major American financial institutions, a war going into its sixth year, an election that is far from predictable and a housing crisis that has thousands struggling to pay their mortgages, it’s no surprise that Americans are worried about the future. To make matters worse, the rising cost of oil and the slumping stock market have most of the country on edge. If you aren’t on edge, you must have a nice doctor prescribing overpriced mood-levelers or pain meds — if you are lucky enough to have health insurance.

Americans are scared – and in the absence of true leadership, fear can manifest itself in many different ways. What behaviors are we likely to see? Will people stay close to home and “nest?” Will they invest in “sure things?” Stuff their mattresses? Watch more TV? Play more Videogames? Eat out less? Perhaps there will not be any visible changes at all?

A quick historical tour clearly shows that war, commodity shortages and elections are fairly common in America. However, we can’t use the wisdom of hindsight to judge our current situation, so the collapse and consolidation of some of America’s oldest and most influential financial institutions is scaring everyone from white shoes to Jimmy Choo’s.

Instead of chowing down on Xanax Bars, let’s look at some crisis situations where everyone didn’t completely freak out. One of the most noteworthy cases was in 1993 when the World Trade Center was hit with the first foreign terrorist attack on American soil. Despite the fact that one of the biggest financial buildings in the world was hit with a 1,500 lb (680 kg) urea nitrate-hydrogen gas bomb, the market failed to be adversely affected. In fact, the market was actually up at the end of the day. While Americans were rightfully worried about homeland security, which wasn’t a household term in 1993, they did not show their worry financially as the market continued to climb for as much as a year later.

America had all but recovered from the depths of the Depression and the market, which hit 41.22 in the middle of 1932, was over 100 by November of 1941. December 7, 1941, the day that Pearl Harbor was bombed sent shivers down the spine of the financial industry, which had been working hard for over ten years to recoup loses from Black Tuesday. But, the war sent thousands of Americans to work, boosted the economy and the Dow Jones steadily rose from 1942 to 1946, when it was above 200 points.

Certainly the collapse of Bear, Lehman, Merrill, AIG and other financial institutions is cause for concern, but while some companies are slashing jobs and trying to stay afloat, others are expanding, trying to take advantage of the situation. For example, Lone Star Funds, a private investment company, has consistently purchased other companies’ damaged assets at rates way below cost. The company began doing so during the saving and loan fiasco of the early 1990’s and continues to do so today. In July, Lone Star purchased nearly $31 billion dollars worth of assets from Merrill Lynch for $6.2 billion. The investment company even got Merrill to finance 75% of the purchase price. This is not to say that Wall Street is not in crisis. It is. But some companies are well positioned to withstand what’s happening, and they are prospering.

Even in modern history, this is nothing new. During the Depression when companies were drastically cutting spending on advertising, Procter & Gamble actually increased its advertising budget. The company knew that despite financial turmoil, people still needed household products like soap. They turned to radio and developed broadcast shows aimed at the women who purchased such goods and the soap opera was born. The company not only held strong but actually increased revenue and improved its brand image. Procter & Gamble understood the power of message management and by developing radio shows based around their products; the company was able to expand their base and brand.

While established media networks like newspapers, radio and television are hurting from a lack of ad revenue, internet and tech companies seem to have an unlimited upside. While great American mainstays like Lehman and Merrill are folding or merging, relative young guns like Google and Apple continue to expand their reach, boosting revenue and expanding into new markets. While Google failed to meet analysts’ predictions in the third quarter, the company’s rampant growth across a variety of markets, including cloud computing and mobile devices and applications, has positioned them well for the future. The stock got hammered this week because of fear about the entire ad marketplace, but if Google’s initiatives are indicative of the future, the company won’t be relying on a single revenue stream for much longer. They’ve acquired the world’s largest online advertising company (DoubleClick), are working on a sustainable power grid with GE, selling mobile devices through T-Mobile and the potential search ads deal with Yahoo!, which may or may not pass government regulation. In fact, Google chief economist Hal Varian believes that the recession could have a positive impact on Google, as consumers looking to find good deals online will use their search engine and search ads to save money, a technique coined the “Wal-mart Method.”

Apple is another company that has shown prominent growth despite the slumping economy. Jobs and Co showed 74% growth in the Q2 over Q2 last year. The company sold more computers during the first six months of 2008 than analysts expected, with 856,000 desktops purchased and 1,433,000 laptops. This is significant because Apple is a niche computer company. While Dell, HP and other PC manufacturers produce cheaper, more affordable models which run on Microsoft’s Windows operating system, Apple’s Mac offerings are more expensive and cater to a segment of society with more disposable income. The very people who are less likely to be harshly affected by the down-turning economy. And, while their computers may be pricey, their signature iPod mp3 player comes in so many models that it is almost universally affordable.

According to Nielsen Monitor-Plus, ad sales were down slightly during the first half of 2008. However, there were some industries that flourished. For instance, Cable TV saw the largest growth, 8.1% over this time last year, with Syndicated TV falling in behind it with 7.2% growth. (www.marketwatch.com). All this despite the fact that major advertisers like the automotive, pharmaceutical and motion picture industry spent roughly 9.5% less during the first half of 2008 than they did from January to June in 2007.

Media mogul Rupert Murdoch isn’t worried about the effect of a tanking economy on his News Corp empire. When asked, Murdoch answered: “Hard times are good for big companies.” Murdoch also believes that the Wall Street Journal and all of News Corps Internet offerings will be resilient to the economic climate. The WSJ, which recently launched a site redesign, charges $100,000 a day for ads on its site, while MySpace charges an average of $500,000 a day, and sometimes as much as $1 million.

It is very easy to argue that if the financial services industry collapses, it will take the rest of us with it. Perhaps. No one can (or should) try to make such a prediction about a system of this complexity. What is true, is that some consumer behaviors are going to change by choice and others will change by necessity. Predicting where your business fits into that equation is easier, and it’s a better use of your time.