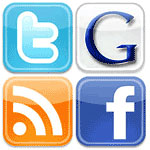 Had the pleasure Wednesday of seeing Michael Chin of Kickapps do a (kickass) presentation in my Digital Marketing class at Baruch’s biz school. He demonstrated not only how social media centered around a brand or organization can cultivate enthusiasm (and generally give an indicator of sentiment), but also how much mineable data there is about each participant in the network. That data goes beyond the typical demographic info — zip code, age, gender and so on — into deeper direct or inferential matter about everything from the person’s preferences, lifestyle,“friends,” and even to clues about what enthuses, delights and annoys them. One avid basketball fan Chin showed, for example, had put a wealth of info about herself in reams of discussion posts, videos, comments, still photos on a team’s fan site. That’s a gold mine for that team if it chooses to access it.

Chin, at the Social Times conference (which my company helped produce the media for) a few weeks earlier had told me that CRM (Customer Relationship Management) can become a lot more than the grid-driven database systems we have today. True, powerful tools like SalesForce.com allow collaborative workers to share information and better serve (and sell and upsell) clients and potential customers. Just call a rep at your cellphone provider to see, in action, how a good customer database system can tell the person on the other end of the line all kinds of things about you that might get you to either stay happy with them or pay for more service.

But those systems pale in comparison to the kinds of data we’re giving about ourselves on personalized media like social networks and Twitter. Imagine if through some sort of Semantic Web application a company could glean information not only on what info you offered, and tags you’d left, but also the things you were passionate about, what you’d been writing and saying, asking for and complaining about. Imagine if the company could handle the complaint or fuel the delight of that passionate, highly involved (ok, “engaged”) fan — how much might she crow about you, then, an not only increase her loyalty but also help spur others into the fold?

True, it’s a lot of work. And some of the work is subtle and requires a very human touch. We don’t today have an algorithm that can mine such soft and random data in this way (though a recent Open Calaisdemonstration did wow me to the possibilities), and it takes a human touch to understand the not-so-fine line between delighting someone and making them feel you’ve gone over the creepy edge into invading their privacy.

And what about the cost? Chin half-jokingly bristled when I asked if he could map social media back to a return on the investment. It would take a lot of data and crunching to even try to get at whether the dollars spent mining the social info is more cost-effective than the more blunt-force forms of marketing and communication more prevalent today. Certainly, none of it lives in a vacuum, and it goes along with other messaging, so it’s next to impossible to separate out the effect. And there is, of course, more than a hint of self-serving in Chin’s remarks (use social media, and delight your customers!). But that doesn’t make his point invalid.

We can assume, be nearly sure, that the data mining, perhaps driven by Semantic Web-type applications (even a quick run through “Wordle.com” can show you the terms someone is using most, let alone the Calais system of auto-sifting) will improve and that the point at which the parsing needs to get handed over to a human will be pushed further down the line, weighted more to technology and less to the humans. It makes sense for the people at media companies — who can help mine and sell their data — social networks and marketers to think along these lines.

Dorian Benkoil is the host of Naked Media.