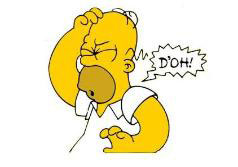 Last week I wrote an article entitled, Broadcast News Vs. Information: An Unfair Fight which outlined an experiment: my goal was to see how my week would go if I didn’t get any news from traditional media. The article is a quick read and it would help if you gave it a look.

Now, I get a lot of emails from gruntled and disgruntled fans and critics everyday, but the volume of emails, tweets, fb messages, IM’s, txt messages and plain old telephone calls caused by this article was way over the top. Literally thousands — and some of you were really pissed.

Here’s the thing. Most of the disgruntled journalocracy took great pleasure in telling me that I was getting my news and information from traditional media, I was just getting via a different distribution platform.

To quote Homer Simpson, “D’oh!” Wow. Really? I wish I would have thought of that. Sadly, everyone who echoed this sentiment completely, and I do mean “completely” missed the point of the article. Let me state this clearly so that you old people with old brains stuck in the last century can understand it — the whole point is that I didn’t need the existing, traditional, incumbent, old-fashioned value chain to achieve my goal.

It doesn’t matter if there were journalists or Martians on the other end of my stream of bits, the value chain no longer exists. To put it another way, Newspapers distribute news using a technology developed in the late 1500’s. Let’s face it; mashed-up, dead trees with ink on them delivered to your door by gas guzzling trucks really don’t have a place in the information age. But the content obviously does. There is no better demonstration of the media’s transition from the industrial age to the information age, than reading a electronic representation of a newspaper story on a Kindle about a newspaper company being devalued by an archaic workflow and outmoded technology. (That’s where I read the story about Cablevision writing down its investment in Newsday.)

The value chain for a newspaper includes fuel futures, tree farms, paper mills, printing presses, delivery trucks and all kinds of stuff dedicated to the physical distribution of a walled garden known as a newspaper. Nothing gets printed on the dead trees that the newspaper publisher doesn’t put there. It’s a closed system that has been variously described as “All the news that’s fit to print,” and alternatively, “sensationalist filler used to separate the advertisements.” It’s a dual revenue stream business: advertising and subscriptions. Just like cable and satellite television.

The point of my exercise was not to say that the content creators and news gatherers don’t have a place in the 21st century. They obviously do. Unfortunately, the business models that were enabled by the advent of the printing press, 400 some-odd years ago, are horribly out of date!

Seriously — because this really is no joking matter for people in the media business — it is not going to be very long before a bunch of smart, currently out-of-work programmers, experience architects, marketers and modern-day journalists get together and craft a crowd-sourced, filtered, highly automated, all-singing, all-dancing interface that provides an extremely emotionally satisfying user experience for people interested in hyper-personalized news. Not hyper-localized, hyper-personalized. Advertisers are demanding it. Content. Context. Contact. Shelly Palmer’s three C’s. You can think of it another way, “right person, right place, right time.” It is the ultimate advertiser and marketer fantasy and it is literally right around the corner. (Check out the Cablevision/VisibleWorld announcement this week.)

Don’t be fooled into thinking that “discovery” is somehow undermined during this process. It won’t be. Look at first generation programs like StumbleUpon or social bookmarking programs like del.icio.us. These are really fine examples of what we have to look forward to. It won’t take that long for this to evolve.

So, to summarize, I am fully aware that actual human beings who work in real jobs at real media companies were creating the content I was consuming in my experiment. I am also fully aware that because they were kind enough to convert it to bits and make it available on the public Internet, I was able to aggregate it for myself, for free (with the exception of my subscription to the WSJ) and with very little advertising attached. No matter how you look at it, this is not a sustainable model. And, ladies and gentlemen of the 4th and 5th Estate, this was the point of the experiment and it is a fact-of-life that we must deal with.