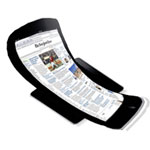 Tweet Article Share Article on Facebook Email Article Share Article on LinkedIn
As a Jobsian supplicant and an Apple acolyte, I really, really want to love the iPad. No one on Earth has made me buy more stuff I don’t need with money I don’t have than Steve Jobs. He’s my hero. One writer who came to visit me in my home office looked around and observed, “It looks like Steve Jobs threw up in here.” It does. There are three MacBooks, two MacBook Pros, one Mac Pro, several 30″ Apple monitors, an Airport, dozens of iPods from every generation, a couple of iPod Touches, plus my old and my new iPhone 3Gs. Apple, Apple everywhere and only one lonely PC in sight. (I use the PC so I can feel the pain and suffering of the other 92% of the computing world, keep up on the latest virus issues and bash the crap out of Windows — which is a full contact sport in my world.)

So, with this insane fanboy intro, you should be expecting a serious love letter to Cupertino about their latest offering, the iPad. Not going to happen.

Behold the iPad. Obviously, no female staffers were consulted while the C-suite was approving the name. iTampon was a huge trending topic on the day the device was introduced, along with “Tampad,” which is also funny, but a little gross. Moving past the name, I am trying to understand what the iPad is and why it needs to exist.

It is beautiful, sexy, Applesque, remarkable, awe-inspiring, extraordinary and every other adjective Apple management could find in the thesaurus. I agree. It’s all those things. But beauty is only skin deep. Let’s have a quick look at what it is and what it isn’t.

Like the iPod Touch, it is a consumption device, not a creation device. It has no camera. This doesn’t seem to be a big deal, except that Video chatting is one of the fastest growing behaviors and the iPad’s “intimate” approach to computing (Steve Jobs’s own words, not mine, so no snickers about feminine protection and intimacy) would seem to leave you wanting for that capability.

It has no USB support. So, you are locked into the convention of connecting to the iTunes/App Store/iBookstore software on your computer to move files to and from the iPad. There will be a huge issue with converting HD video files and many other types of files for use on the device. There are some annoying dongles that can be used to read an SD card (from your camera) or output video to an external monitor (like your TV). Knowing Apple, they will be $30 bucks a pop and, if you’re like me, you’ll lose them constantly.

The screen is 1024×768. This is a 4×3 aspect ratio VGA display. It is not HD compatible. You cannot play HD video on the device. And, 16×9 (HD formatted) video will have to be viewed in a letterbox. Astoundingly, it outputs composite video. It is very possible that your new HDTV does not have a composite video input. However, there is some good news, video from the iPad will look smoking hot on anything with a Cathode Ray Tube display. So don’t throw out your old Sony Trinitron, color tube TV may be coming back!

Like the iPhone family of devices, you cannot play Flash video on an iPad. (Apple hates Adobe, this is unlikely to change.) So you are going to see a lot of blue boxes where streaming video and Flash applications appear on websites. Since 98% of computers with web browsers are Flash enabled, your multi-media web browsing experience will be somewhat sub-optimal, and I’m being kind.

I could go on, but the lack of USB support is the deal breaker. This is not a computer, not an iPod, not a netbook, not a notebook … it is an extension of the Apple ecosystem.

If you need to drink the proverbial Kool-Aid to have an iPhone or even “be” a Mac Person, you’ll need a gallon jug of the stuff to get you to buy into the iPad.

Would it have killed them to put a working USB port in the thing? How about a little iSight camera facing you? And, what were they thinking with the OS? You can only run one app at a time. Like an iPhone or iPod Touch, the OS can only run one app at a time. I’m writing this article on my MacBook Pro, let’s see how many apps I have open: MS Word, Mac Mail, Firefox, Address Book, Daylite, Omnifocus, Adobe Bridge, Photoshop, Adobe Illustrator, Keynote, PowerPoint, Lightroom, Soundtrack Pro, iTunes and the all-important Text Expander running in the background. (Text Expander, from Smile On My Mac Software, is the single most useful app on a Mac and it would be 100 times more useful running on an iPhone or iPod Touch while other programs are running so you could, um … expand your text.) One app at a time? You must be kidding me.

The iPad is an extension of the Apple ecosystem. Once you enter, you will be trapped (lovingly, beautifully, thrillingly) inside. They will give you all of the software for free, a word processor (Pages), a spreadsheet (Numbers), presentation software (Keynote), photo software (iPhoto), email (Mac Mail), etc., all part of the ecosystem. You will buy books, magazines, music, movies, all neatly presented inside a prison of such striking beauty; you may not realize that you are being held captive. This model will be awesome for content creators and publishers. They will be able to charge you and know you paid. (Except for the recorded music industry, which is circling the drain and is not responding to treatment.)

Will the iPad capture the minds of consumers? Will it start new industries? Is it a paradigm shift or a parlor trick? I don’t know. Being a Kindle owner (and lover) and looking at the iPad e-reader app, the iPad wins no contest — oh, wait … no it doesn’t. The backlit screen is not e-ink and your eyes will fatigue like they do on a computer. The battery won’t last anywhere near as long, it’s double to four times the price before you add the data plan. All true, but the iPad is beautiful and the apps are magnificent looking and … hold on, I’ve spilled some blue liquid out of my Kool-Aid cup. Thankfully the iPad is Maxi-sized and has wings for extra protection.