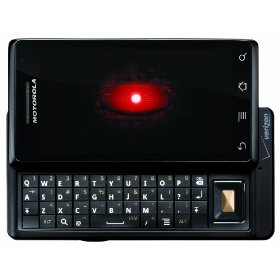 Author’s Note: This article was written in March 2010 about the original Verizon Droid. Droid fans, you are going to hate this article and, more importantly, you are going to want to write me a nasty emails telling me how “uneducated” I am about the Droid App Store and how there is an app that solves every one of my problems. Here’s a news flash. I know. Here’s some news for you — normal people who buy phones will expect the stock applications for features like txt, email and contact management to work perfectly as delivered. Apps, in the minds of normal, non-tech people, are for additional features, NOT core functionality. It is with the general consumer in mind that I write the following:

I’ve had my Verizon Droid since the phone debuted in November of 2009. I replaced my fully functional, absolutely-perfect-for-a-business-guy, BlackBerry Curve. As many of you know, I carry an iPhone 3GS, which does everything “except” work as a phone, so, my first priority for the Droid was that it work as a mobile telephone.

I am happy to report that the Droid is a pretty good phone, has a serviceable speakerphone and good Bluetooth connectivity. However, after three months of trying to love it, I am giving up and going back to a BlackBerry, here’s why: first, the lack of a physical button to answer a call creates some very ergonomically awkward situations in the real world.

To answer a Droid call you must slide a virtual button from side to side. This is relatively easy inside, where it’s dry and the lighting is artificial. Outside on a cold or rainy day, the cool factor goes away instantly. On a bright sunny day, you can’t see the screen. On a cold day, you have to take your gloves off to answer. To be fair, this is the case with any phone that uses a pure touch screen, but it becomes a real issue in the real world.

Now, unlike the iPhone, the Droid can run more than one app at a time. This sounds like a fantastic feature, and a major selling point. Unfortunately, it is very hard to turn an app off, so it doesn’t take long for the phone to become overwhelmed. How big of a problem is this? The number one downloaded app in the Droid app store is “Advanced Task Killer” an app you must use dozens of times a day to kill apps that are slowing down your phone.

Speaking of slow, displaying or responding to a txt message can take 10 or 15 seconds. And basic apps like your contacts, email or txt message client freeze, lock up or just crash constantly. The number of gestures required to answer a txt message is on the border of insane. First you must turn the phone on, unlock it with the slider, then either press the txt app menu icon or try to slide down the status bar — another impossibly annoying design failure — then, you have to wait for the txt window to populate, then decide which keyboard you want to use to answer. On an iPhone or bberry, the phone just wakes up with the message displayed and you’re ready to respond. On a Droid, you can’t carry on a txt convo with one-minute delays between txts, because the process will simply drive you over the edge. The fix, elongate the time the screen stays active. Easy … as long as you have a handful of extra batteries. In practice, it is not possible.

Just to continue the rant, and I know this is a rant, Google is a less emotionally satisfying experience on the Droid than on my iPhone or my old BlackBerry. I don’t understand why this is, but the Google apps for iPhone rock and the Google apps for mobile, which I use on my bberry, makes a BlackBerry a mini computer. On the Droid, not so much.

I could go on and on, suffice it to say … I gave the Verizon Droid a good ol’ college try, and after three months, I’m done! I cannot think of a situation where I would recommend the Droid over a current model Blackberry Curve or Tour. As for it being an iPhone killer … not any time soon.