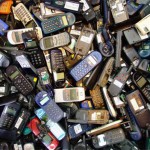 Analog FM Radio chips in every mobile device? Cell phones, smart phones and app phones? Mandated by Congress? How? Why? When something sounds this stupid, it begs for all of those questions. After all, there doesn’t seem to be a reason for the government to blast the digital mobile device industry back into the Stone Age. Who would think this is a good idea? Who would benefit?

Radio stations in the United States pay a royalty for the music that they play on the air. It’s known as a public performance royalty and it is mandated by copyright law. The rates are set by a Copyright Royalty Tribunal (See 17 USCS Sects. 801 – 810 for details).

To a layperson, this sounds like a great plan. Radio stations play music to attract an audience. They measure and sell the audience to advertisers. Then, they pay a percentage of their income to Performing Rights Societies such as American Society of Composers, Authors & Publishers (ASCAP), Broadcast Music International (BMI) and SESAC (which used to be the Society of European Stage Authors & Composers, but is now just SESAC) who, in turn, distribute the money to the composers and publishers of the music. Perfect. Right? No, not exactly. There are several parties involved with the production of a song who are not paid under this system including, the musicians, singers and, most importantly for this discussion, the recorded music companies.

It may not surprise you to learn that the National Association of Broadcasters (NAB) the trade association that represents the radio stations is opposed to this additional royalty.

How opposed? When is the last time someone asked you to write a check for $100 million dollars that you never had to write before? Not only is this a real fight, it has been going on — in one form or another — for quite a while.

Now, if you were the NAB and you really didn’t want to pay the RIAA what would you do? Would you invoke the teachings of Niccolò Machiavelli? Maybe resort to a plot worthy of Franz Kafka? No, no. When you’re in a real fight, the only possible strategy comes from the pen of Mario Puzo speaking through his character Michael Corleone, “My father taught me many things here – he taught me in this room. He taught me – keep your friends close but your enemies closer.” Yep, when in doubt, use The Godfather. It’s simple, it’s direct and it’s just what the NAB is doing.

The NAB reached out to the RIAA and both organizations went to Congress and proposed the inclusion of, let’s say it again: Government mandated FM chips in mobile phones. It’s brilliant! And, it has created a really good fake fight.

To cozy up to the RIAA, and get them to stop looking to the broadcasters for extra royalty money, the NAB partnered with them and made this proposal. It’s the McGuffin. Sure the NAB “believes” that mandated FM chips will be in the interest of public safety. Read Dennis Wharton’s blog post on the official NAB website.

Public safety? Are you kidding me? The vast majority of local radio stations are unmanned and could not possibly respond to any kind of public safety issue. FM radio tuners require antennas and, on a mobile device, that means a headset is required for reception (the antenna is in the headset cord). I’m not going to burn battery life on my phone during a crisis because it is likely to work as a voice device and a txt device and it may be my only hope of real communication. And, not to put too fine a point on it, I was personally less than 20 blocks away from the World Trade Center on 9/11 (I live in NYC) and at no time during the attack was any version of the Emergency Broadcast System used by any broadcaster. TV was working as was cable, Internet, cell service, etc. There were some outages, but the Mayor used 100% of the communications tools available to him to assure New Yorkers, and the rest of the world, that New York had a fully functioning government in place and that our Bravest and Finest were on it. And they were!

I could go on and on with examples where radio failed to inform the public during disasters large and small, man-made and natural, but that would be playing right into the brilliant twist of the NAB’s plan.

Chips in cell phones isn’t about public safety, it’s a call for reinforcements. And it is a strategy worthy of Don Corleone himself.

In a letter to the Chairmen and Ranking Members of both the House and Senate Judiciary Committees dated 20 August 2010, leaders of the mobile phone, wireless and consumer electronics industry associations said what the NAB wanted. “It is simply wrong for two entrenched industries to resolve their differences by agreeing to burden a third industry – which has no relationship to or other interest in the performance royalty dispute – with a costly, ill-considered, and unnecessary new mandate.”

Mandated analog FM chips in cell phones is a really, really bad idea. Everyone knows it. And with all of the lobbying firepower lined up against it, it has very little chance of actually happening. In the end, I am truly impressed by the NAB’s use of misdirection and prestidigitation. How to get others to kick your enemy’s butt? Kudos guys, way to save a $100 mil a year!