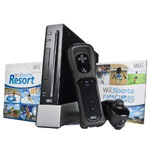 The Wii with Wii Sports Resort and Wii Remote Plus Controller bundle is an expansion of the motion controlled video gaming revolution that Nintendo began with the release of the Wii console back in 2006. The bundle consists of a stylish black Wii console, matching black versions of the ultra motion sensitive Wii Remote Plus controller, Nunchuk controller, and a copy of both Wii Sports Resort and the original Wii Sports game. The console supports all former controller configurations used by Wii and with the now standard advanced capabilities of the the Wii Remote Plus controller provides new and more experienced player with the ultimate new way to start or expand a Wii party in their homes.

Click the “Get More Info” button to see great prices from one of our preferred retailers.