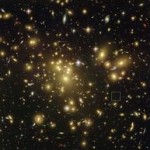 Using the Hubble Telescope, astronomers have identified the oldest and most distant galaxy yet to be discovered. What can only be seen as a faint light, has been approaching us for 13.2 billion years and existed when the universe was 480 million years old. The discovery fits cosmologists’ timelines of the first stars being formed 200-300 million years after the Big Bang. Read the full article at NYTimes.com