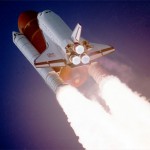 The NASA Space Shuttle program is over. Columbia and Challenger (both lost in heartbreaking accidents), Discovery, Atlantis and Endeavor and their brave crews served our country well. After more than 135 missions, the remaining orbiters: Discovery, Atlantis, Endeavor and Enterprise (the test vehicle, not intended for space flight) will become museum pieces.

Government-funded manned spaceflight is not budgeted or planned in the foreseeable future. Is this a good thing?

Some say that manned spaceflight is too expensive and not scientifically important enough to warrant the expense or the safety risk. This is a pretty good argument. It is much, much easier to construct a spacecraft with a payload environment suitable for non-living things than it is to construct one for human beings.

However, some say that men are made to explore – it’s in our DNA. They argue that the end of government-funded manned spaceflight is wrong. We must explore the heavens, no matter the cost and no matter the risk.

Many who argue that we must press on often cite the wondrous technology that has come directly from trying to keep men alive in the most hostile environment we have access to. Want a great list? Checkout NASA’s Space Shuttle Spinoffs site. There, you’ll find descriptions of heart valve pumps, automotive insulation, medical diagnostic instruments, land mine removal devices and a plethora of technological innovations that are directly attributed to the program.

As interesting as this all is, it misses the point. In the last half of the last century, the only entities big enough to get a man into space were governments. Although the Cold War space race was a monumental game of missile chicken, we did learn enough about rockets to get a scientific job done too.

Today, Bill Gates or Warren Buffet could personally fund a manned mission into space. And, although, in this case they would know that they wrote the check, they are on a list of about 200 people in the world that could personally cover these kinds of costs. When you add in big business, the list gets much, much longer.

There are also private programs like the space initiative at the X Prize Foundation, which driving innovation in the private sector. The Ansari X PRIZE, won by Burt Rutan and Scaled Composites in 2004, was a $10 million competition to build a privately funded craft that reaches a sub-orbit of 100 km twice in two weeks. The Google Lunar X PRIZE is a $30 million competition for the first privately funded team to send a robot to the moon, travel 500 meters and transmit video, images and data back to the Earth.

There are also quite a few private, commercial initiatives. My favorite is Virgin Galactic. If you want to book your flight into space, the ticket price is $200,000 and you only need a $20,000 deposit. They even have “accredited space agents” around the world who can answer questions about your upcoming space flight.

Will private industry do a better job combining the power of pure research and applied engineering, and move us closer to our manned spaceflight goals? Probably. Will private industry do it more economically? Absolutely. Is there any reason for the US Government to be in the space business? Humm … that’s a harder question. Quite obviously, the military needs to be in the space business. Communications, weapons, defensive technologies all require space platforms or satellites. Truth be told, the GPS system needs a complete overhaul and someone really needs to get on that like, yesterday.

That said, NASA will do what it does with a smaller budget and a less captivating charter and, private industry, individuals, consortia and cabals will get to colonize space.

It may be the end of an era, but I don’t think it is anywhere near the end of space travel. If you’re worried, you have the power to do something about it. Get involved with science and math programs for K-12. Help inspire kids about the heavens and do what you can to promote technology as the direct route to space. The list of disciplines needed to take us into space is remarkably long and offers something for just about everyone: math, materials research, aerodynamics, avionics, electrical engineering, computer engineering, mechanical engineering, propulsion, structural analysis and manufacturing, fluid mechanics, astrodynamics, control engineering, solid mechanics, aeroelasticity, software, noise control, thermal control, life support and life sciences, and many, many more.

Let’s keep the momentum going. Now, it’s up to us!