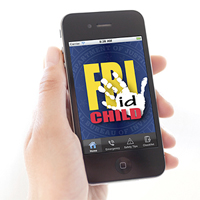 According to a survey released by the National Center for Missing and Exploited Children not enough parents in the United States know vital statistics about their children: height, hair color, eye color, weight, etc.  Young children change in physical appearance so rapidly that it can be a challenge to keep up with this information.  And in a time of crisis, it can be even harder for a panicked parent to accurately recall and disseminate this vital information to law enforcement.

For law enforcement, the first few hours in the case of any missing child are the most crucial in successfully finding a child alive.  Having an accurate description of your child and a recent picture can make the difference between a search and rescue effort to a search and recover effort.  For years, parents have been getting ID cards for children that have everything from vital stats to DNA.  Usually, the child carries one and the parents keep one.

This is a great idea, and the Federal Bureau Investigation (FBI) has just taken it one step further by making an admirable leap in to the digital age with its release of an iPhone app called Child ID.

This is the first-ever mobile app released by the FBI.  Not only can parents input and store information about their child’s appearance using this app, but they can also send information directly from the app to law enforcement during a crisis.

Kudos to the FBI.  It would be great if the FBI added two additional features to this app – password protection and fingerprint storing capability.  A lost or stolen iPhone could put lots of personal info about your child in the wrong hands.  A simple password protection would take care of that.  Second, a fingerprint storage area in the application could be of great use to authorities.  While iPhones do not, as yet, have the technology to accept or process fingerprints, it would be easy enough for a parent to scan a fingerprint and store it as an image that can then be loaded to the app.  Tech-savvy parents can probably figure that out now, but adding a simple walk through into the app would take care of all the parents out there who will use Child ID.

The FBI has done a tremendous service to parents and children by releasing this app.  It is now up to us to use it.