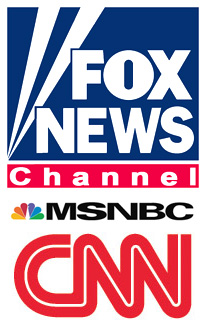 Re-syndicated from XfinityTV.com
In an unusually active August for big news stories, Fox News Channel once again came out on top of the cable news ratings race.

While FNC’s dominance vs. its rivals in cable news – CNN and NBC-owned MSNBC – is not exactly surprise news (since FNC has enjoyed a huge lead over the other guys for so long that we can’t remember when, or if, the situation was ever different), it continues to fascinate us. And the cable news ratings for August – a month that saw so much heated news coverage of stories ranging from the debt crisis to Hurricane Irene – provide us with another opportunity to see where things stand in the tripartite cable competition.

Here are some highlights of the August ratings:

FNC is not only the dominant news channel on cable, it’s one of the most popular channels on cable, period.Its prime-time lineup – consisting on weeknights of “The O’Reilly Factor” (8/7c), “Hannity” (9/8c) and “On the Record with Greta Van Susteren” (10/9c) — was the third most-popular in all of cable in August. FNC’s rivals in the evening weren’t even close – CNN’s prime time was ranked 27th; MSNBC’s, 29th. When the “total day” is taken into account, FNC ranked sixth in August among all cable channels. CNN was 24th and MSNBC was 31st.

FNC also reported a number of double-digit percentage increases in viewership for a number of its shows compared to August a year ago.

Here’s why we find this so interesting: FNC’s rivals never seem to make headway against this Fox juggernaut, no matter how many stories get posted everyday on the media Web sites about Anderson Cooper and his “Ridiculist” (CNN) or the latest complaints about FNC voiced by the likes of Lawrence O’Donnell, Rachel Maddowand Ed Schultz on MSNBC. In fact, the more the other guys rail about Fox News (in the case of MSNBC) or fail with one new show after another (for example, the short-lived Eliot Spitzer show on CNN), FNC comes out looking like the best-produced, the best-focused and best-managed news channel of all of them. And the ratings – in August or a slew of other months previously – show it.

And there seems little that CNN or MSNBC can do to close the viewership gap because, if there was anything they could do, they would have already done it.

Adam Buckman has covered the TV business as a journalist for more than 25 years, including 18 years as an editor and columnist at the New York Post. He is now a New York-based columnist for the television Web site XfinityTV.com (formerly Fancast.com), owned by Comcast Corp.