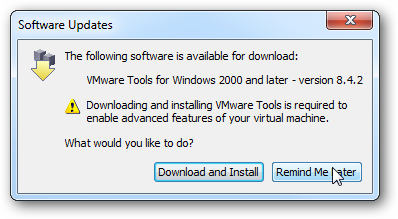 Imagine a bunch of scammers and hackers sitting around in a dark room together. They’ve just created brand new viruses that will invade your life by invading your computer to steal your banking information, take all your passwords, send threatening emails to all your friends, make all your personal photos public, and….. And, they’ve devised a simple and yet genius way to get it into your laptop or smartphone that’s always connected to the Internet using some of the hundreds of software pieces that run on your computer.

Amazingly, software providers have also just figured out a way to block these viruses. But the only way this will work is if you update your laptop or smartphone with the latest security updates they have just sent you. And out of sheer courtesy, they are asking you if you want to update now or “Remind Me Later.”

What are you going to do? What do you do nearly every time you see that nice “Remind Me Later” button looking so sweetly at you while you’re busy updating your Facebook or sending an IM or working on a work email? We all do it. We all tell our friends who are trying to protect us to come back another time. You’re OK leaving all the doors and windows wide open for the bad guys to break into your life. You’re OK with giving your life away to some stranger in a dark room on the other side of the world.

This scenario might sound dramatic, but, it’s really not. The “Remind Me Later” button is not your friend. In fact, it is probably the most dangerous ‘button’ you can push.

Let’s put this in perspective. If robbers had figured out how to turn off your home alarms or break into your house, would you fix it right away or put a note in your calendar to “Remind Me Later?” Similarly, we don’t ask someone to remind us to lock our car later if we know we have left it unlocked. The same is true for every security measure we take in our real lives.

And yet, we hit that “Remind Me Later” button as quickly as we can, like we’re playing whack a mole at an arcade.

Some people complain that security updates take too long, are too cumbersome, and bog down their computers. That was true…about 10 years ago. With today’s high speed systems, security updates can run quietly in the background. Kind of like the locksmith who can do his thing, while you’re busy doing yours in the house.

Hackers are literally creating and launching new viruses every day. That means that these invaluable updates are needed frequently. Every time a software provider figures out a way to block the bad guys, they send out an update. They have effectively put a new lock in an existing door, ensuring the safety of your personal life.

So, next time the dialogue box appears asking if you want to run a security update now, just remember the “Remind Me Later” button is not your friend.