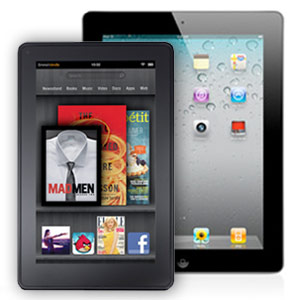 “Mom … you bought me the wrong one!” Yep, that’s the thing about kids and stuff. They know what they want. And, more importantly, they know what they don’t want. According to Nielsen Media Research 44% of kids between the ages of 6 and 12 years old want an iPad 2. So, how about a nice Amazon Kindle Fire? After all, it’s $300 cheaper and it does a lot of the same stuff. You can make this argument until you are blue in the face, but – after “death and taxes” there is now a third certainty … “If you want an iPad, nothing else will do.”

It has gotten to the point where I am now quite sure that there is no such thing as the “tablet business” in the consumer electronics industry. There is the “iDevice business” and, then, everything else.

That said, Amazon’s Kindle Fire is an awesome device. Mine arrived the other day and I absolutely love it. It’s a good e-reader. I like the screen. Video looks good, audio is acceptable and, for $200 bucks, what’s not to love?

Which begs for the question, “Who is it for?” If you can’t get your 6-12 year-old kid a $200 Kindle Fire and make them happy, is this a gift for someone else on your list?

Is it anything like an iPad 2? No. Not in any way. But it is at least $300 dollars cheaper and that makes it the right device for several different users.

Here’s how to decide which if the Kindle Fire is right for you:

If you want a device to: read ebooks, check email, browse the web, read magazines, watch videos, listen to music, play a few games and use a few apps, the Kindle Fire is for you.

If you want a device with a camera, video chat, expandable storage, 3G wireless access, GPS, maps, location services, or bluetooth, do not buy a Kindle Fire.

If you are on a budget and you want a well built, beautiful, simple to use e-reader with a ton of extra features that offer a tablet-like experience, you really can’t go wrong.

If you are not on a budget and you want an iPad, buy an iPad.

And, most importantly, if you think that you want all the things an iPad can do, but you’re not willing to spend the $300 extra dollars to purchase one, do not purchase the Kindle Fire thinking that it’s a poor man’s iPad. That does a disservice to the Kindle Fire and to you. The Kindle Fire is not pretending to be an iPad, people are making the comparison because it’s an easy comparison to make. Don’t!

The Kindle Fire is the perfect gift for someone who reads and wants to consume Amazon content. Think of it as a portable access point to amazon.com. It also has some great cloud storage features and, if you’ve got a robust WiFi connection available to you, you will really enjoy streaming music and videos from the cloud.