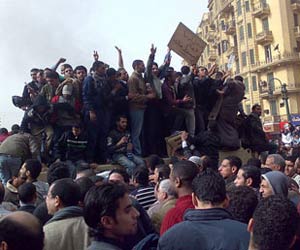 We talk a lot about the impact of social media on commerce and human connections.  The social media platform has the ability to transfer news and ideas faster than news and ideas can even be generated.  Since the start of what the media is calling the ‘Arab Spring’, social media has literally become something quite revolutionary.

Last spring, the conflicts in Bahrain and Egypt showcased the true power of the Internet, particularly of Facebook.  Before the proliferation of the Internet, protestors spread the word of an upcoming rally or demonstration through posters on city center walls and word of mouth.  Sitting governments would try to quell these movements by forbidding posters, declaring curfews, and outright banning demonstrations.

And then, along came the Internet and along came social media sites like Facebook.  Against all odds, Facebook has become one of the most powerful tools for the promotion of freedom.  It has made spreading the word to organize for a cause easier to do, faster to execute, and more far-reaching.  And yet, the best solution to stopping such an upheaval in today’s times is the same as it has been for hundreds of years – silence the protestor’s ability to speak and organize.  For a government, this means removing the newest weapon from the hands of the people, and that weapon is the Internet.

For many of the protests we’ve seen in the last year, the ultimate goal has been to overthrow the oppressive policies and actions of a government through massive civilian uprisings.  Historically, anti-government citizens achieved their goal by various means – organizing peaceful protests, seeking help from international organizations, taking up arms, and sometimes engaging in violent attacks against the government and military.  All of this remains true today, with the added power of the Internet.  For the protestor, the Internet is a powerful tool for increasing strength, gaining greater and broader support, and reaching out to family and friends.

It’s shocking to a great number of people that Facebook would become instrumental in the overthrow of long standing dictatorships or brutal regimes. People of Egypt used it. People of Tunisia used it. People of Bahrain used it.  When the war ‘ended’ and the NATO participation in Libya finally came, it was announced on Facebook.  It seems as if there is no end to the reach of the Internet, social media, and the concomitant power of Facebook.

The importance of the Internet in a revolution goes beyond the individual.  Foreign nation-states play significant roles during an uprising, and the Internet is one of many tools at their disposal. In many cases, providing Internet support and continued access to the Internet has become much like providing artillery support.

At end of the day, the Internet has become one of the most powerful tools for promoting freedom.  Amazingly, a platform that started as a means by which people share photos has evolved to help topple brutal dictators. There’s no telling where all of this could lead civilization.