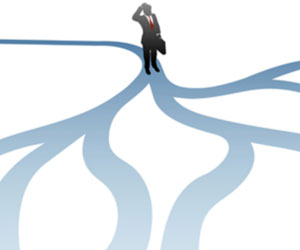 About five days ago, a dear friend of mine asked my opinion on whether she should entrust digital to her brands’ existing agencies or hire digital specialist agencies. Currently they do both, but are somewhat dissatisfied with the results.

I asked which were her existing agencies, and surprisingly she asked me to answer the question without knowing. She DID SAY none of her traditional agencies had REALLY led the company toward digital, though now that she was expressing serious interest they claimed to have all the requisite capabilities. Similarly, NONE of her digital partners have provided real programs based in brand strategy. She also asked why there was a need for separate digital shops – that intuitively she understood it was complicated, but shouldn’t big agencies be able to deliver the goods?

Never one to shy away from giving a long winded opinion, I sent her the following:

After the dot bomb, some major traditional agencies saw digital as a strategic distraction. They felt it lacked creative options that fostered brand development, added pronounced audience and media complexity, required more staff per dollar to execute, and demanded expertise that their traditional media teams lacked.

All that was true in its way, except perhaps the strategic distraction part. But one could even make a case for that when digital usage was relatively low. Digital was quite limited creatively. And was and is far more complicated, especially as it is structured and managed now:

1. Tens of thousands of media options, versus 100 or so in TV and really only about a dozen given how many properties are owned by the largest media companies
2. Dozens of creative options
3. A buying process that still relies on RFPs/responses/phone calls/meetings
4. A tracking and trafficking process that often leads to remarkable amounts of manual labor
5. High agency turnover and title inflation
6. Clients and agency leaders expecting more for less PLUS innovation

The advent of DSPs and trading desks is slowly reducing the amount of labor per dollar, but most brands still expect a significant portion of spend with specific major pubs and in “breakthrough” programs. Those require lots of labor per dollar.

Until the past couple of years, most of the traditional buying leaders were not terribly troubled to let digital agencies take this high labor/low margin business. Naturally, sister digital agencies were preferred, but losing 3 or 5 or 8% of total spend wasn’t a “crisis.” It represented relatively small dollars and these digital agencies tended to have subordinate, relatively unimportant relationships with clients.

Those brand companies that cared about digital generally employed separate digital agencies. Even many of those clients that didn’t care all that much chose separate providers when it was clear that their traditional agencies didn’t “get it.”

As digital grew more important to brands, they began to ask those digital agencies to play a greater role in marketing planning, and to involve them earlier in the process. The problem is that there are many digital people that don’t have the same deep understanding of brands and marketing as do brand or traditional agency people. I’m not suggesting they/we are ignorant of strategy, but that because we have historically been less involved in defining and delivering on major strategic issues, it’s not our core competency. The digital world has historically been more about DR and hype, and about providing “activation” in conjunction with a broader branding initiative. “Activation” meaning moving cases out the door.

Of course, brand marketers have really woken up to digital. As digital spend has increased, traditional agencies have again asked themselves why they are sharing business with an indy digital shop when they could acquire digital business and keep it all. The holding companies in particular have scrambled to build or buy digital expertise. What they haven’t always done is give their various agencies incentive to collaborate.

The key “battle” that will determine the manner in which brands engage in digital is which “side” of this agency conflict will address its weaknesses more thoroughly.

• Traditional or “Integrated” agencies have profound understanding of brands, marketing goals, and ideas. They are generally behind in understanding and having experience with digital technology and vision. They need to find ways to acquire digital expertise and drive competitive advantage by creating value in cross media creative development, planning and buying. A portfolio approach to media built on a digitally centered idea.

• Digital agencies need to enhance their lead in digital knowledge, while really mastering the fundamentals of strategy, branding, and real bona fide marketing. Shifting our thinking from one driven by passion for forms of execution to passion for strategic objectives. Only in this way will we be able to fully leverage our seats at the brand table. Only in this way with digital shops marry passion and expertise to delivering on business objectives. And the key is, our ideas and programs need to work both within and beyond digital, even though we don’t derive revenue from traditional efforts.

Which brings me to the answer to my friend’s question. I told her that agencies are ultimately collections of individuals; applying generalized conclusions to specific companies is misguided. But that it would be a good idea for her to assess the extent to which her traditional alternatives really “get” and are inspired by digital. And the extent to which her digital alternatives “get” strategy and brand business issues.

Ultimately marketing will end up being led by companies that define and deliver highly strategic, digitally centered integrated campaigns. Campaigns that capitalize on the best opportunities in digital, but within a broad brand building context and a larger media view.

The extent to which digital agencies have a future relates to their ability to stay ahead of digital developments AND understand branding, the difference between a digital idea and a digitally centered idea, and the best ways to really partner with other service providers. Otherwise, there’ll be no reason for brands to take on the complexity of having two agencies where one might suffice.

Partnership is a critical consideration because in many cases agencies don’t play well together. That is sometimes even the case when both agencies are divisions within the same company. Brands need to do more than say, “get along.” They need to reward cooperation and punish its absence.

So I giggled a little, and replied, “Yes”.

She was not amused.

It’s after moments like that that I am lucky to still have friends. 😉

Jim Nichols is Senior Partner - Strategy at Catalyst S+F, a marketing services company based in San Francisco. Surrounded by so many youthful Internet marketers every day, he fancies himself at 47 the "Oldest Living Digital Marketer." He keeps a daily blog profiling start-ups for ad:tech, is a is a frequent contributor to iMediaConnection, and has also contributed to ReadWriteWeb, Venturebeat, Brand Channel, MediaBizBloggers, and Daisy Whitney’s New Media Minute. You can also find him on Twitter @CatalystaJim