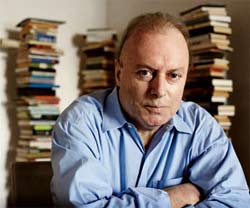 We cannot banish dangers, but we can banish fears. We must not demean life by standing in awe of death. —David Sarnoff

Christopher Hitchens was not one of my favorite journalists/authors, as he moved from being an avid devotee of Trotsky to an outspoken neo-conservative warmonger. But I did read what he had to say. So when I came into the office and read that he had died of esophageal cancer after a one and a half year battle, many thoughts came to me.

You see, one year ago I, too, was diagnosed with esophageal cancer. It’s a particularly nasty form of cancer with an extremely low survival rate. That’s because one is generally asymptomatic before diagnosis, and by then, it has already spread or metastasized throughout the body.

In my case, the cancer was discovered quite by Providence and, thankfully, in its earliest stage. Last week, one year after initial diagnosis, I was deemed cancer free. I still live with the specter of its return and the anxiety that accompanies semi-annual endoscopic exams, but fear is not what controls my life. As I read about Hitchens, my mind drifted to the way so many people live their lives in fear.

I am not speaking about soldiers, but every day people in every field of endeavor. Subordinates live in fear of their bosses. Bosses live in fear of failure. We actually live in a culture of fear. I happened to chance upon a Republican debate and heard Newt Gingrich spreading his fear meme as to why the Patriot Act is such a good idea. And if you think Obama is above peddling the meme, one need not look further than his insistence that habeas corpus and the fourth amendment be abandoned in the recent National Defense Authorization Act. [Obama insisted that the government have the right to imprison US citizens INDEFINITELY without trial.]

I always had a distaste of my own fears. Why heights made me dizzy and afraid, I don’t understand and can’t explain. But it didn’t stop me from parasailing 4 times and taking an extended hot-air balloon ride. And I think facing the odds of esophageal cancer makes me qualified to speak about fear in a new way. In fact, I now believe I can sense fear in others almost immediately.

A personal confrontation with death is an existential experience, often resulting in a heightened awareness of, appreciation for, and patience with the fears in others.  The exact opposite occurred with me. Now when I speak with media buyers, I smell the fear as they try to ponder a new idea I might float their way. The online media ecosystem has such a smell of fear that I am repelled by its stench.

I belong to a few discussion groups. Fear rules the day, dominated by the safety of convention.  Case in point, I recently spoke with an executive at ABC that I have known for a very long time and he mixed fear with stupidity – a devastating one-two punch – to tell me he was just responding to what his clients were asking for, regardless of whether or not it made any sense.

I believe that fear can destroy the soul. And mixed with stupidity, it destroys initiative. It destroys creativity. It destroys innovation. In Dune, they said “fear was a mind killer”. Many people use “mind” and “soul” interchangeably. Mind is a secular version of soul.

Some sales technicians suggest imparting even greater fear to close the sale. Politicians are experts in this technique. Remember Colin Powell at the UN speaking about non-existent WMDs in Iraq?  Forget for the moment that it was a blatant lie. The purpose was to foster fear, inspired and driven by disingenuous motive. The technique was successful as the nation geared up for a senseless war.

So how can we banish fears as David Sarnoff so eloquently suggested? Few want to face the truth, let alone consider a possible answer. They’re afraid of the answer, and have no faith that they’ll ever find the truth.  But faith can overcome fear, despite being every bit as irrational as fear.  That’s because true faith – in oneself, in others, in a higher calling – is stronger than fear.

I’ve been accused of crossing the line from critic to curmudgeon. I don’t see myself as a curmudgeon simply for suggesting that the emperor is indeed naked. As soon as something becomes widely accepted, Groupthink takes over and we become blinded by a fear of bucking convention.

Online media and marketing has been my profession for the past fifteen years. I have seen so many people paralyzed by fear that I feel pity and aversion at the same time. People often reject mystery, awe and the wonder of possibilities because they fear the uncertainty attendant with them.

My hope is that people can learn to allay their worst fears without abandoning their souls in the process.  David Sarnoff had it right.