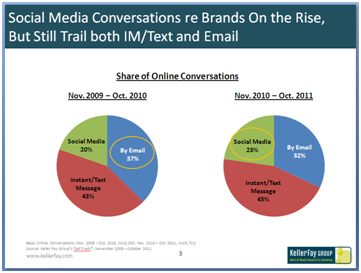 As the trade press continues to focus on the year that was in 2011 and forecasts for the year to come in 2012, social media remains a hot topic of conversation. Two reports have come out recently making the case that email remains a big and effective part of the social story.

In his keynote address to MediaPost’s Email Insider Summit, Tynt CEO Derek Ball noted that despite the growth of Facebook, sharing via email has gone up over 20% in the past 18 months.  “We call email the original social network because it really is social,” he says.  About a week later came a report in Marketing Profs that two-thirds of business leaders (68%) say they plan to integrate social media with their email marketing efforts in 2012, suggesting the value of a hybrid solution.

These two reports caused me to wonder where exactly email fits relative to other online media when it comes to word of mouth, and how has that changed over time?  Our analysis compares not only social media versus email, but also IM and texting given the growing importance of mobile in the social mix.  The basis for the analysis is my firm’s TalkTrack study, which provides a continuous monitor of people’s online as well as offline conversations about products, services and brands.  A number of interesting findings emerged:

Thus, 45 percent of technology-enabled brand conversations happen via IM/text, up a few points from the year prior. A third (32%) occurs via email, representing a 5-point drop since last year. Just under a quarter (23%) takes place via social media (up 3 points from a year ago).

There are important age-related differences here. The profile of those who use email to “talk” about brands generally mirrors the population as a whole, while youth (teens and 20-somethings) are disproportionately represented among those who talk about brands via social media and via texting/IM.

This all serves as a valuable reminder that social marketing comes in many shapes and sizes, and that the marketer’s social playbook needs to take advantage of any channel that helps to spark and support consumer conversation. Here we highlight the role of social networking sites relative to other ways people can communicate online; elsewhere we have broadened the discussion to include offline conversations as well, and the role that “traditional” media can play in driving conversation.

Taken as a whole, it’s important to remember that all media are social, as we’ve said before. It follows, as well, that all digital channels are social.