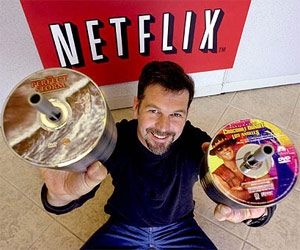 A few thousand people spend their early December in part inside the Grand Hyatt hotel, watching UBS’ annual global media conference. They’ve been doing it for 39 years, catching presidents, chief executive or financial officers from major media ventures discourse over accomplishments in one year and projections for the next.
Few of those few thousand stay around for the final session of a UBS conference day. Most depart after luncheon keynoting from the likes of Jeff Bewkes at Time Warner or News Corp’s Chase Carey, heading back to the office to catch up on calls or e-mail.

Not so Tuesday afternoon past, midway into UBS’ 2011 affair. A packed room, one of the more crowded in recent memory, came to watch an extreme rare public appearance by Netflix CEO Reed Hastings. (He gives few media interviews or conference speeches.) In extreme likelihood, they came to see Hastings explain away and/or mea culpa away the double-whammy strategy (price hike, followed by unsuccessful split of DVD and streaming businesses) that nose-dived Netflix’s stock price and consumer persona.

Hastings did so with a calm, cool demeanor, as in entering the lion’s den a la Daniel and crawling out unbruised. “We became overconfident…sort of became a Bank of America symbol,” he said. “We didn’t need to be that way.”

Some in attendance thought Hastings showed good poise and humor when addressing Netflix’s recent shortcomings. What no one expected from Hastings was an extensive look of the forthcoming TV world from his perspective, and how it will dictate Netflix’s course from here.

For Hastings, how big TV gets the rest of this decade rests on two things: the movement of fiber optics into the home, and the universe of connected or smart TVs, carrying enough processing power to handle original interactive applications controlled by voice, body sensations or remotes, alongside TV channels and souped-up Web sites. “Smart TV is the untold story of this year,” he declared to his UBS audience. “People are buying them, stores are selling them. If you’re a TV manufacturer, you don’t want to be a dumb monitor (maker attached) to a cable or satellite player. What we’ll see worldwide is fiber optics everywhere to the home, office and business…and over the next few years, most TVs sold will be smart TVs.”

What’s more, if 3D TV can hurdle past its current problems of audience acceptance, and advanced picture quality and transmission technologies like 4K or ultra HD get ready for primetime, TV set providers “can deliver other new viewing experiences over the next five years. Look for an explosion to happen here,” Hastings added. One innovative viewing treat may be one or more social ventures which go beyond usage of Facebook or Twitter on the set.

What’s the big end result for Netflix? A company nimble enough not only to provide any genre of content anywhere in the world over the TV or PC, but commission original content from any source across the globe and have that original carried anywhere on the globe. “When you create a global company, you can make global buys,” Hastings explained. “Where we want to end up is being the world’s best buyer of global content for global citizens.”

If Netflix’s first bets in original programming that debuts elsewhere than broadcast, cable or satellite TV pay off (Lillehammer, Orange Is…and House of Cards in 2012, an Arrested Development revival in 2013), that scenario will come true. “People already welcome us as another bidder (for original content)…In 5 or 10 years, first-run could be a significant fraction of our (annual programming budget, above 15 percent), or could be a little. We’ll see,” Hastings said.

A lot of cards will have to fall Hastings’ way–some economic, others technology or content, and more than a few consumer-driven–for his TV scenario to come through. Give him credit for giving this UBS crowd a few far-reaching things to chew over…and let the dealing start.

*****
Other UBS conference observations from the passing parade:

***Second year in a row Walt Disney was absent as a conference presenter. What gives?

***At least two CEOs–Josh Sapan of AMC Networks and Ken Lowe from Scripps Networks Interactive–peppered their upbeat commentary with traces of disdain for not getting ad revenue that matches the ratings performance of their channels. That, and per-sub fees, are “way underpriced for where things are today,” Sapan added.

***Look for Lionsgate to keep experimenting with early video-on-demand windows of its films, between end of theatrical release and ahead of DVD. Goal: “We’re going to try to p–s off as few people as possible,” said vice chairman Michael Burns. “Slice-and-dice this so everyone has a competitive window.”

***Diversity and how TV can have more of it as the U.S. moves toward a multicultural majority, was largely an absent subject at UBS. One of the few times it was raised: Discovery Communications CEO David Zaslav pointing out that Welcome To Sweetie Pie’s on Oprah Winfrey Network picked up a 2 rating among African-American viewers, as did an episode or two of Lisa Ling’s Our America series. (Point of disclosure: Sweetie Pie’s executive producer Craig Piligian was a guest on my Tomorrow Will Be Televised radio program November 28). That led to some press speculation mid-week that OWN will shift format to compete head-on with BET, TVOne, etc., speculation tempered down at week’s end by OWN executives.

***Further diversity point: time for UBS and other investment firms holding media conferences to give this subject major play. Make this a must next year and beyond.

***Love the delectables UBS provides for attendees at breakfast and between conference sessions each year. My favorites this time around: peanut butter as well as cream cheese for the bagels (long overdue), pumpkin cake, and well-displayed veggies. However, someone within the Grand Hyatt’s pervue went overboard on Aquafina and played Scrooge with those wonderful bottles of Lipton “Pure Leaf” diet Iced Tea. Come on, open your hearts and wallets next holiday season and bring those bottles back in plentiful supply. Be a good Santa on this, will you?