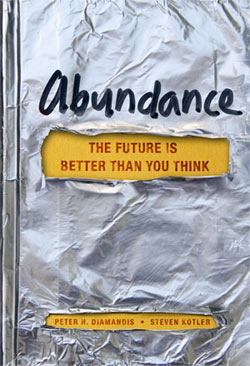 Those of you who follow my blog know that I am an optimist. The Shelly Palmer School of Connected Living has one primary thesis: “Technology is good.”

This is why I am very excited about this new book Abundance – The Future is Better Than You Think, written by my friend Dr. Peter H. Diamandis, X PRIZE Foundation Chairman/CEO, and Steven Kotler, Science Journalist.

Abundance is a powerful antidote to today’s dark pessimism. Peter and Steven present a convincing case that the world has been getting better at an accelerating rate over the last few decades. There are abundant stories and hard facts in the book to support the case that our future is better than we think.

Anyone who enjoys technology will love the extensive tour of the latest in exponential technologies, DIY innovation, Techno-philanthropy, and more. Have you considered that the free apps we take for granted today on our smart phones (GPS mapping, video conferencing, digital and video cameras, full sets of library and encyclopedia, etc.) would have cost more than $1 million dollars, affordable only to the richest, 20 years ago? And those poorest citizens of the world, who used to be called the bottom billion, are now the “Rising Billion” because of accessibility to technology? Masai warriors in Kenya now have cell phones that give them better access to mobile communication and information than USA presidents 15 years ago.

So there you have it. If you want some good news (great news actually), read Abundance. If you want to help change the world’s conversation from its current pessimism about scarcity to Abundance, share the book with your friends.

You can visit Peter and Steven’s website www.AbundanceTheBook.com, where you can pre-order Abundance by February 13 and get thank-you gifts (free access to Singularity University’s video library packed with graduate training on exponential technologies, AI, Robotics, Synthetic Biology, Neuroscience, Entrepreneurship, Innovation, etc., The Transcendent Man documentary, and more.) But, before you do, check out this excerpt from Chapter 1.

The Lesson of Aluminum

Gaius Plinius Cecilius Secundus, known as Pliny the Elder, was born in Italy in the year 23. He was a naval and army commander in the early Roman Empire, later an author, naturalist, and natural philosopher, best known for his Naturalis Historia, a thirty-seven-volume encyclopedia describing, well, everything there was to describe. His opus includes a book on cosmology, another on farming, a third on magic. It took him four volumes to cover world geography, nine for flora and fauna, and another nine for medicine. In one of his later volumes, Earth, book XXXV, Pliny tells the story of a goldsmith who brought an unusual dinner plate to the court of Emperor Tiberius.

The plate was a stunner, made from a new metal, very light, shiny, almost as bright as silver. The goldsmith claimed he’d extracted it from plain clay, using a secret technique, the formula known only to himself and the gods. Tiberius, though, was a little concerned. The emperor was one of Rome’s great generals, a warmonger who conquered most of what is now Europe and amassed a fortune of gold and silver along the way. He was also a financial expert who knew the value of his treasure would seriously decline if people suddenly had access to a shiny new metal rarer than gold. “Therefore,” recounts Pliny, “instead of giving the goldsmith the regard expected, he ordered him to be beheaded.”

This shiny new metal was aluminum, and that beheading marked its loss to the world for nearly two millennia. It next reappeared during the early 1800s but was still rare enough to be considered the most valuable metal in the world. Napoléon III himself threw a banquet for the king of Siam where the honored guests were given aluminum utensils, while the others had to make do with gold.

Aluminum’s rarity comes down to chemistry. Technically, behind oxygen and silicon, it’s the third most abundant element in the Earth’s crust, making up 8.3 percent of the weight of the world. Today it’s cheap, ubiquitous, and used with a throwaway mind-set, but—as Napoléon’s banquet demonstrates—this wasn’t always the case. Because of aluminum’s high affinity for oxygen, it never appears in nature as a pure metal. Instead it’s found tightly bound as oxides and silicates in a claylike material called bauxite.

While bauxite is 52 percent aluminum, separating out the pure metal ore was a complex and difficult task. But between 1825 and 1845, Hans Christian Oersted and Frederick Wohler discovered that heating anhydrous aluminum chloride with potassium amalgam and then distilling away the mercury left a residue of pure aluminum. In 1854 Henri Sainte-Claire Deville created the first commercial process for extraction, driving down the price by 90 percent. Yet the metal was still costly and in short supply.

It was the creation of a new breakthrough technology known as electrolysis, discovered independently and almost simultaneously in 1886 by American chemist Charles Martin Hall and Frenchman Paul Héroult, that changed everything. The Hall-Héroult process, as it is now known, uses electricity to liberate aluminum from bauxite. Suddenly everyone on the planet had access to ridiculous amounts of cheap, light, pliable metal.

Save the beheading, there’s nothing too unusual in this story. History’s littered with tales of once rare resources made plentiful by innovation. The reason is pretty straightforward: scarcity is often contextual. Imagine a giant orange tree packed with fruit. If I pluck all the oranges from the lower branches, I am effectively out of accessible fruit. From my limited perspective, oranges are now scarce. But once someone invents a piece of technology called a ladder, I’ve suddenly got new reach. Problem solved. Technology is a resource-liberating mechanism. It can make the once scarce the now abundant.