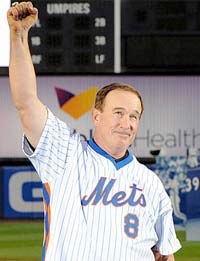 In mid-summer 1986, the New York Mets were about 20 games ahead. Jerry Della Femina called and asked me to write a song and produce a music video for the team. It was the kind of idea that Jerry was famous for – create and produce not only a song and music video, but create a half-hour “making of” video so the whole thing could be packaged for home video release. Of course, everything hinged on the Mets continued success.

When the Mets winning streak put them 27 games ahead, everyone in New York knew the 1986 Mets had a chance to take it all the way. I got the green light and, along with Greg Smith and Hal Hackady, wrote “Let’s Go Mets!”

Everything was awesome. The agency liked the song, the video storyboard was approved and even Mets management thought it was a “toe-tapper.” (Not my words.) There was only one thing left to do … play it for the team.

Time was extremely tight and, so we took the train to Pittsburgh to play the song and explain the team’s role in the music video. With boom box in hand, we got to the locker room and, we got schooled fast – baseball players who think they have a shot at getting to the World Series don’t want to think about anything but baseball before an away game.

Gary Carter was the first person to walk up to me and ask me what was going on. We spoke for about five minutes and then he and Keith Hernandez got everyone’s attention.

It’s hard to describe how instantly likable Gary Carter was. He had a unique ability to make everyone he spoke to feel like they were the most important thing in his world — a truly remarkable attribute. Some people thought it was a parlor trick, but years of infrequent, but substantial conversations with Gary proved to me it was not.

In 1987, Gary (along with Mookie Wilson and Roger McDowell) starred in a kids video that I also wrote and produced for Jerry called, “Think Big.” It wasn’t anywhere near as successful as “Let’s Go Mets!” but while we were on location shooting Gary and I really got to know each other. At that time, before Google and Wikipedia, I did not know that Gary was a Football player. I found out during a game of touch football with cast and crew during a lunch break. Gary had the arm of an NFL quarterback – he told us some great stories about his high school sports career and his love of both football and baseball.

His smile was infectious, his laugh was genuine and he was a true gentleman in every respect. And, not for nothing, he let me use his game glove to catch while we were shooting Roger McDowell pitching. I’m not sure I can adequately describe how it felt for a Long Island kid to catch Roger McDowell with Gary Carter’s game glove while Gary “took over” as director.

“Let’s Go Mets!” became the “official theme song” of the World Champion 1986 New York Mets and the video went Platinum. It kicked off a pretty good time in my career as a composer/producer and writer/director – but the true gift of 1986 was meeting and getting to know Gary Carter. Some will remember Gary as an All-Star, power-hitter who set the stage for the Mets to become champions; I’ll remember him as friend who left us too soon. Gary, RIP.