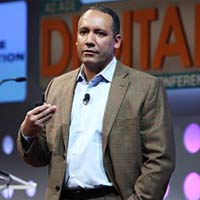 At some point growing up, many kids heard this advice from one or both parents: “Now ____, be on your best behavior.”

Quite soon, we TV viewers may have to heed that advice, when dealing with our relationship to TV sets. There’s a huge disrupt ahead for that relationship, and thank Ralph Santana for the early alert.

Santana is Samsung’s senior vice president and chief marketing officer, and the leadoff speaker at last week’s Association of National Advertisers TV conference last week in New York. His presentation came more than a month after Samsung and its TV set competitors showcased their latest round of connected (aka smart) models at the International CES in Las Vegas. Like earlier editions, these connected sets carry TV networks, the Web and original interactive TV applications. Unlike them, consumers can manipulate what they view and how they view it by voice, touch or body movement, beyond the capabilities of remotes, smartphones and tablets. Samsung’s CES-highlighted sets include the ability to recognize faces en route to viewing choices.

That latter function potentially carries some baggage over privacy, as in the consequences from information generated by facial features leaking out by accident, ending in another’s set. Debatable as that can be, that pales by comparison with what Santana suggested in a few sentences in the midst of his ANA talk. “Techonology is liberating content, thanks to third-party apps and cloud-based platforms,” he told the crowd. “With TV, you can control with voice commands, face and gestures. Soon, TVs will be biometric.”

Biometric…as in recognizing people based on one or more intristic physical or behavorial traits, according to Wikipedia and other reference sources. Those traits range from DNA, odor or scent to how fast you walk across a room or type words on a computer screen. All it takes is one trait. Lo and behold, you’ve added biofuel to your set.

Santana moved on to his next topic without critical elaboration for anyone in the crowd who may have sensed a bomb dropping. Especially people at CES or tracked the news from there who didn’t hear a peep from anyone about biometric functionality. The questions coming to my mind: Is Santana introducing this in public because his company’s ready to put a biometrics set in stores? What biometric traits will be monitored? What’s the ethical and privacy concerns? If Samsung’s ready with such a set, will Vizio, LG, Sharp, Sony, etc. follow in quick order? How will consumers react when anyone launches this kind of set?

Santana had an opportunity to address these questions at ANA and didn’t take it. He backed out of a scheduled question-and-answer period on late notice. He also evaded efforts by journalists in the house for more detail.

My guess, and only my guess, is that if Santana got the OK from his superiors to raise the subject, Samsung will demonstrate the biometric elements of its next-gen smart set pretty soon. Maybe a matter of weeks.

When that happens, pay attention. Get the key details on your radar screen. Then make room for a big debate over what good biometrics can bring to the viewing experience, versus what harm. Could be as important a debate as any over the consequences this next, interactive generation of TV has on our lives and our future. Let’s be on our best behavior with it.