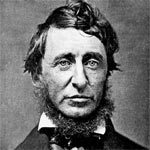 You have to work hard to get your thinking clean to make it simple. – Steve Jobs

I read an interesting blog post by Uwe Hook on the biggest challenge facing agencies. Succinctly put, he suggested that keeping up with the overwhelmingly fast pace of change was the number one problem facing advertising agencies.

On first blush, it is hard to argue that the dizzying pace of change creates challenges, anxieties, insecurities and a host of other maladies that can block the flow of success. But I would like to suggest something else to seriously consider. An epigram by Jean-Baptiste Alphonse Karr gave rise to this short essay; “Plus ca change, plus c’est la meme chose.”

Aside from making my high school French teacher soar with pride, the above translates to “The more things change, the more they are the same thing.” And the two quotes at the beginning from Steve Jobs and Henry David Thoreau were chosen because they represent the same meme, even though separated by more than 200 years.

Technology changes quickly. Thirty months ago, the iPad did not even exist. Now that is technological adoption in blazing fashion. This essay is not about slowing the pace of change. This is not my point.

But consider that Thoreau spoke of technological change back in 1850 and Uwe Hook posted a blog that Henry David could have written more than two centuries ago (reread Walden if your doubt me.) My guess is that 200 years from now there will be a new thinker extolling the virtues of simplicity.

We too often believe that our technological tools transform human nature. We get trapped into defining ourselves by our tools and lose sight of the fact that human nature remains as it has for thousands of years. In fact, we are so distracted by technology that we forget about what makes us human. And that has not changed.

So our biggest challenge is not keeping up with technological changes, but sifting through the noise to understand that our essence has not changed. Yes, we have Facebook, Pinterest, Big Data, iPads and probably many new things that have not hit my radar yet. And all of these technological changes distract us from how human nature essentially remains unchanged.

And what does that mean for the agency? For the marketer? For the educator? For our society?

When we forget that human nature is the same, we begin to place inordinate attention on our tools to the detriment of thinking about people. This is the danger that many fall into. The rush to understand technology distracts us away from placing people first.

So in the classroom, we obsess about our tools and spend less time understanding what makes us human. Agencies rush to adopt the latest technology-du-jour so much so that they have lost sight of human motivation. We chase our tools like a cat chases string. This means chasing string becomes an end in itself.

With so much pressure to stay abreast with new technologies, there is a cost. Our ability to see into the human heart becomes vestigial. What agencies, educators and businessmen of all types need to do is to make technology serve what makes us human. Instead, I fear it is the other way around.

PreviousShelly Palmer chats about a Twitter bug and Facebook's IPO on Good Day Wake Up with Steve Lacy and Sharon Crowley NextDerailed: ‘Community’ run over by Subway