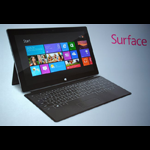 It’s sacrilege to some Apple fanboys. It’s also something none of Apple’s competitors have been able to claim since that “magical” day in early 2010. But when Microsoft unveiled the Surface tablet (actually a pair of them) Monday, the software company clearly had one ultimate goal: to make a tablet that’s better than the iPad. By most standards, Apple has crushed its tablet rivals that have tried to compete feature-for-feature. No single tablet running Google’s Android system has gotten much traction (save the smaller, cheaper Kindle Fire from Amazon) and BlackBerry maker RIM’s Playbook hit the market with a thud. Read the full story at CNN.

PreviousWindows Phone 8 Announced: It's Windows 8, On a Phone NextKeyloggers: The Undisputed Heavyweight Champions of the Malware World!