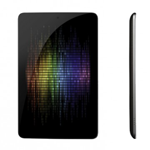 Google’s Nexus tablet will offer Android 4.1 Jelly Bean, a 1280×800 IPS display, and other beefy specs, at least according to one source. Google is expected to announce its Nexus tablet at its I/O conference later this week. But until then, the folks at Gizmodo Australia got their hands on an alleged training document that reveals key details about the device. The 7-inch tablet will be the first to run the latest flavor of Android 4.1, aka Jelly Bean, according to the report. Manufactured by Asus, the tablet will be outfitted with a 1.3Ghz quad-core Tegra 3 processor, a GeForce 12-core graphics processor, and 1GB of RAM. The IPS (in-plane switching) display will offer a 178-degree viewing angle with a resolution of 1280×800 pixels. Read the full story at CNET.