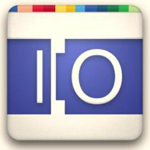 This week, some 5,500 developers will converge in San Francisco for Google I/O and to listen to the search giant’s latest and greatest plans for Android, Chrome and other products. And, of course, to pick up the best schwag in the conference business. Tickets to the sold-out show — which buyers assume include at least a couple shiny new Google-powered devices — have gone for as much as $4,500 on eBay. But Google I/O isn’t going to be the place to get an overarching view of Google’s priorities for the next year — CEO Larry Page isn’t even expected to speak, given that he’s lost his voice. Read the full thing at All Things D.