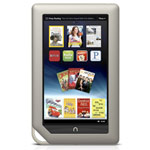 Microsoft announced this past April that it acquired a 17% stake in a newly-formed Barnes & Noble subsidiary that will focus on Nook tablets and eReaders. What the company may not have mentioned at the time is that the new partnership might also yield a line of Microsoft-branded tablets. Microsoft sent out a last-minute invitation to a press conference late last week, and multiple subsequent reports have suggested that this event will see Microsoft unveil a new line of own-brand tablets powered by Windows RT. According to a recent report from TechCrunch, however, the Redmond-based company plans to take the wraps off a Barnes & Noble joint effort. Read the full story at Boy Genius Report.

PreviousShelly Palmer Radio Report - June 18, 2012 NextWindows 8: You’ll Absolutely Hate It At First (But Give It A Chance Anyway)