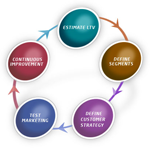 It is our task, both in science and in society at large, is to prove the conventional wisdom wrong and to make our unpredictable dreams come true.

For thirty years I have been at war with myself. In these years, we have owned media, sold it and alternately owned a marketing company that used not only our own media but outside media to sell directly to consumers. The mindset of media owners and marketers is decidedly different and hence provided the boundaries of my personal war. Participating in almost every phase of the ecosystem became all encompassing when we moved all of our business online back in 1998.

As mentioned, media owners and marketers usually are at odds on most things. Media owners want to charge more for their space and marketers want to spend less. Pretty simple. I always get a kick when online networks try to ignore the contradiction by telling publishers that they will get them more revenue per thousand while on a different page promising marketers more efficiency and profit per thousand.

Supposedly a monster algorithm stands between the two and magically glosses over the inherent contradiction… but that is for another time.

A curious exception to contradictions between media owners and marketers is embodied in the notion of “lifetime value” (LTV). There are few more universally accepted gems of conventional wisdom than the notion of LTV of a customer. Why?

First, media owners want marketers to look beyond the transaction. The further the look, the more marketers can spend on customer acquisition…and thus spend more for media. So we get Google co-founder, Avinash Kaushik saying, “I reserve the best hugs, kisses, smiles, love, respect and my deepest admiration for Marketers and Analysts who use Lifetime Value computations!”

If you are not following closely, it would be reasonable to ask who benefits from “lifetime value computations?” Certainly Google does…but does the marketer?

Putting aside the fact that LTV is literally impossible to nail down (the reasons are for another time), I can tell you that as a media owner, I have benefitted greatly by this LTV meme thoroughly entrenching itself amongst my fellow marketing brethren. There are presently 2,040,000 entries in Google for “calculating lifetime value” and to be fair, most of the entries were written by “savvy” marketers. That is what happens when a meme enters into the vaunted heights of conventional wisdom.

I myself have written about the need to look beyond the immediate transaction. Once upon a time, TV direct marketers reduced all expenses associated with a campaign down to the transaction. But as the effectiveness of media declined, more justification to spend money on media was provided by extending the time horizon for making a profit.

Aided by those peddling media (like Avinash and myself) plus a number of mathematicians who created complex algorithms to calculate LTV, rationalizations for spending more money was complete. The effect of LTV on television direct response marketers is illustrative. As more marketers used LTV for media calculations, media rates escalated because dollars spent on media no longer had to bring immediate ROI. The time horizon shifted.

Online marketers who use LTV are not so much in danger of raising rates. There is still too much inventory available. But the effectiveness of online advertising is plummeting and LTV is still being used by media peddlers, agencies, and algorithmic geniuses justifying media spends that are not yielding an immediate ROI.

So what exactly is the LTV dilemma? First, it is a mythical, theoretical number metric that sounds like we should “know” what it is yet requires perfect knowledge of the future to really “know”. Secondly, the more we use a mythical metric to make decisions, the only folks who truly benefit remain media owners. Marketers using LTV can take solace that Google co-founder reserves will give them hugs and kisses.

PreviousApple to become most profitable company ever NextIf Microsoft launches a new tablet today, Barnes & Noble will not be part of it