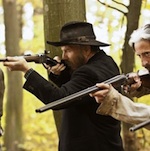 History Channel scored a blockbuster bullseye last week with its Hatfields & McCoys miniseries. The six-hour epic corralled 13.9 million viewers for part one, 13.1 million viewers 24 hours later with part two, and completed the following night with 14.3 million viewers on board for part three. Even more remarkable was that part one premiered on Memorial Day night, not the normal eve for first-run programming of any kind.

In one week, with one miniseries, History wiped out the negative fallout last spring from its clean break with The Kennedys, the controversial miniseries channel executives first stood by, then retreated from when supporters of the Kennedy family cried foul (based on supposedly reading a preliminary script outline). ReelzChannel picked up and presented The Kennedys, the supporters turned out offbase with their rhetoric, and the program earned 10 Emmy nominations and four Emmy awards.
Will History have a great shot at a similar Emmy haul for Hatfields & McCoys, which earned great reviews for its production values and cast, led by Kevin Costner and Bill Paxton? No, and you can rack that outlook up to a pair of idiotic decisions by the Academy of TV Arts & Sciences, which oversees the Primetime Emmy Awards. ATAS declared last year that the best made-for-TV movie and miniseries categories would be combined–without anyone I know, public included, on the record for such a call, and with ATAS ruling for it without elaboration why. Fast forward: the day after History unveiled the finale of Hatfields & McCoys, ATAS declared that from here on, the acting categories for movies/miniseries will be combined. Again, no public groundswell for this, and no explanation on ATAS’ part.
It’s incredibly clear that made-for-TV movies and miniseries are two separate genres of the medium, one 90 minutes to three hours, the other four-to-12 hours or more in length. There’s no way you can compare the content, acting and production values of a movie to that of a miniseries, which has a longer time to tell its story and showcase its characters. No one in the public domain, as far as I and many others can tell, asked for these categories to be combined. You haven’t heard a peep from TV networks or production companies calling for changes. So why is ATAS doing this?  Moreover, why is no one challenging their call?
What you do hear, in private, is that ATAS senses the broadcast networks are so unhappy cable channels win big in both of these domains year in and out lately that if you reduce the number of these categories, they’ll win less often. For anyone at the broadcast nets taking that posture, try this on: if you assembled more made-for-TV films and miniseries, and not leave it all to cable, you would have a better chance of winning. Broadcast nets decided on their own to exit or limit their participation in both formats. Cable nets saw the gap and filled it. That doesn’t mean you, broadcast nets, can’t reenter and do better movies and miniseries. How about it?
So ATAS, how about reversing both of these miscues on your part, stop hiding behind the curtain of sense that’s nonsense, and go back to separate categories?  If not, come clean about why you came to the conclusion there’s a need for combination. Then make your case to all the made-for-TV movie and miniseries talent worthy of being recognized this year with your awards, who won’t be because you’ve made no room at your inn.
Until the next time, stay well and stay tuned!