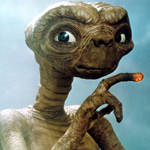 In a move that is part blatant self-promotion, and part so-crazy-it-might-just-work, The National Geographic Channel is preparing to collect your tweets this Friday, then broadcast them into space via the world-famous Arecibo Radio Telescope in Puerto Rico this August. The channel is producing a show about the so-called Wow signal, a 72-second transmission from space received in 1977. The extremely unusual frequency of the signal is why it’s still one of the high points of SETI, the Search for Extraterrestrial Intelligence. It’s also why the astronomer who picked it up wrote “wow!” in the margins of his printout. Read the full story at Mashable.