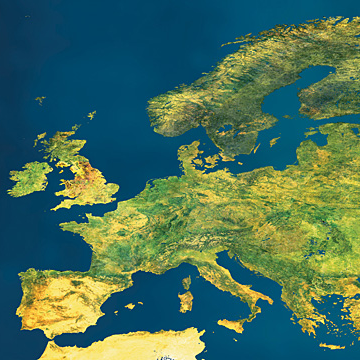 In the last column I wrote about the fact that humanity has entered the Transformation Decade and defined transformation. I also wrote about Legacy Thinking and how we all tend to live in the present and look ahead to the future through the conceptual filters of the past. Both concepts were relative to the reality that is Europe today.

It is clear that Europe is facing transformation both as a continent and region and that the survival of the Euro is clearly in doubt. As promised, this column will look ahead to suggest what the future of Europe and the Euro may be in the years between now and 2020.

Europe is in recession. There is no real growth. Unemployment continent-wide, is, as of this writing, above 10 percent. In Spain it is and will be around 25 percent. The unemployment rate in the 18-30 demographic is 50 percent in Spain and in the mid-20 percent range in several other countries. There is an incredible amount of government, business and private debt, more than at any other time in history.  Greece will shortly default to some small or large degree on its debt. While the Greek economy is smaller than the economy of Chicago, the concern is “contagion,” meaning that Spain, Portugal and Italy could well become the next default casualties.

Economic contraction and high unemployment has existed before on the continent, but never with the staggering amount of debt that exists, and never in the age of the Euro. It is axiomatic that economic growth is one of the key components needed to retire significant debt. If there is no rising tide to lift all boats then the boats are stuck and will flounder. In addition, the 18-30 generation, the future of the continent, has come of age with dramatically lowered hopes and no dreams. They also had nothing to do with the establishment of the Euro or the economic policies driven forward by the 20th Century legacy thinking of their parents’ generation. History points to the reality that such conditions can often lead to revolution and social upheaval.

The political and financial “leadership” of the continent do not seem to have a vision of the future and cannot get out in front of the economic and financial crisis. Each time they meet they are reacting to or anticipating some threat. Wishing and hoping is the antithesis of leadership.

A year ago I suggested that there was a 50 percent chance that we were seeing the death rattle of the Euro. I think that chance is still accurate today. The Euro may well make it, but there might be fewer countries that use it as a primary currency. Without solid economic growth to save the Euro countries, the establishment of a central bank and ceding national sovereignty may be the only way out. I do not think that Germany will throw in the towel and make deep sacrifices to their economic way of live for an ideal that is shaky at best.

Europe will not have much economic growth for the rest of the decade, and certainly not for the next 5-6 years. Any growth will be largely diverted to deleverage the continent and therefore cannot go into growth-oriented investment. The United States is in too much of a fiscal crisis of its own to help Europe. Only China might have the wherewithal to make significant investments, but that will be several years down the road as they are about to transition through some disruptive economic times.

The legacy thinking of the last century relative to the strong social safety nets in the somewhat socialized economies of Europe will come to an end. The idea of full pensions at the age of 60 no longer fits into either the economic realities or longer lifespans of today.  Most every country will be confronted with difficult choices due to the staggering amount of debt already incurred, let alone the additional debt that seems inevitable.

The post WWII legacy thinking put in place during the Cold War will crumble away. Europe is and will always be one of the great continents of the world in terms of culture, thought, history and innovation. It will no longer have the overarching authority and influence in the 21st Century that it once had in the 20th. Of course a key factor here is the shift of influence to the East as India, China and other Asian countries become ever more developed.

Miracles can happen. Profound changes in thinking could alter this downward spiral. Unforeseen “black swan” events could change this scenario in unpredictable ways. That said, given all the evidence and reality today in 2012, it is very probable that Europe has entered a lost decade, a decade when most of the concepts and policies that brought it to its current situation must change. To paraphrase Bob Dylan, until Europe can be busy with being born into this new century, it will be busy dying.