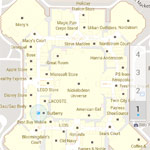 One week after Google Maps went indoors in the UK, the Internet giant has announced that the US version of its indoor mapping service now includes museums, with 22 rolling out today. We first reported that Google Maps was going indoors last November, letting Android users navigate their way around the inside of buildings such as airports and shopping malls. Indoor Google Maps had only been available in the US, Japan, Switzerland and Canada before the UK launch last week, and now it’s expanding the service to include a slew of well-known cultural establishments Stateside too. Read the full story at The Next Web.