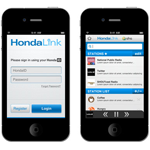 We’ve known about Honda’s plans to bring Aha Radio along for the ride and the tech has already gotten cozy in Subaru and Acura autos. The company has officially outted its plan to partner with Harman to bring web radio, podcasts and both Facebook and Twitter audio news feeds to the in-dash systems of 2013 vehicles. Unlike what we saw in the BRZ, though, HondaLink will arrive with its own smartphone app in tow for pre-selecting content before hopping in the driver’s seat. However, you’ll still need a tethered smartphone in order to run things, the entire kit can be futzed with via steering wheel and on-dash controls. Read the full story at Engadget.