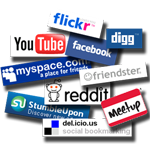 Social media recently reached a major tipping point – not in its number of users, but in the way consumers use social media. The fundamental difference in consumption between social media and mainstream media can now be summed up in one word: “active.” Until now, all media outlets have principally been consumed passively, e.g. watching TV, listening to the radio, seeing a poster, etc. And until now, social media’s predominant pursuits were similarly passive: watching a video on YouTube, visiting a friend’s social network profile, reading a blog, etc. For the sixth successive year, UM has tracked social media consumption across the world in our study called Wave. This year’s study, Wave 6, has witnessed a distinct set of six trends emerging in the U.S. that clearly depicts an “active” social media user:

1. Social networking is not only growing rapaciously, it is now turning into a flourishing, active medium. Among the key shifts supporting this quantum shift in active behavior are:
a. Actively managing a social network profile has virtually doubled in the last four years from 33% to 64%.
b. Microblog postings have tripled in the last three years.
c. Social TV activities via tablets and smartphones are rapidly becoming very visible.

2. Social networks have dramatically consolidated their lead over all other ways people remain in contact with one another. The average number of contacts consumers have via social networks has effectively doubled in three years. This is a significant, measurable shift in behavior. It underpins our view that social media is rapidly becoming the first-ever, proactive consumer media channel.

3. One in 12 consumers has created an online brand community. Although this statistic may seem low, this means that 8% of consumers are now engaged in their own “DIY brand marketing,” totally independent of the brand marketer.

4. While it is well-known that under Age 24s drive social networking, what is less well-known is the level of involvement that African Americans have in this area. There is a strong multicultural element to social media, in part driven by mobile device usage which is, at times, left unsaid in the U.S. trade press.

5. The emergence of two-screen viewing, which is the concurrent use of TV and tablet/smartphone together, is truly transformational. Completely unexpectedly, it is starting to help drive live TV viewing when consumers wish to avoid social spoilers. Moreover, since the consumer is now actively pursuing interaction with TV programs, it redefines convergence to include a customized return path where the viewer can express their personal views about TV shows and TV advertising in real time.

6. Word of mouth and social media can fulfill different roles – they should not be viewed as implicitly interchangeable. Social media is often more consciously needs-driven, whereas branded word of mouth can be more ambient and incidental. Both are powerful. For example, activating broader-based word of mouth has, in part, helped Coca-Cola become the revered brand it is today.

Marketers’ interactions with consumers must reflect the implicit users’ needs of each product category – there is not an easy “one size fits all” solution for effective social media marketing. Although this is often stated, it is less commonly adhered to in the strategy or execution of communications plans. The pursuit of one-dimensional metrics, such as Facebook ‘likes,’ is too simplistic for such a burgeoning, active consumer.

As social media activities start to distinguish themselves from other forms of media, the need for a clear and readily understandable universal industry standard of metrics becomes all the more pressing. Otherwise, a murky chasm may emerge between the conventional practice of media-investment marketing and the emerging powerhouse of social media and word of mouth marketing.

UM’s Wave 6 study is based on 4,000+ interviews in the U.S. and over 40,000 interviews in 62 countries across the world. If you would like to see the overview report of UM’s global findings for Wave 6, please download the study here.

PreviousNegro Leagues Baseball Museum for iPad NextIn a fit of irony, young tablet owners may save the news industry