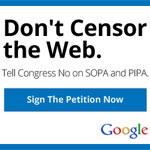 Before the dust could settle from the battle against the Stop Online Piracy Act earlier this year, the people that helped defeat it realized they needed to do more than play whack-a-mole with bad bills from Congress. Since the January 18th SOPA blackout, a group of net advocates, entrepreneurs, and academics have worked behind the scenes to find common ground and leverage an outraged public to promote a free and open internet. Monday, they issued a “Declaration of Internet Freedom:” a set of five broadly worded principles intended to protect the internet from interference. Read the full story at The Verge.

PreviousAs their niche is replaced, Microsoft appears set to delete desktop gadgets from Windows 8 NextWhy the Internet Isn't Going to End College As We Know It