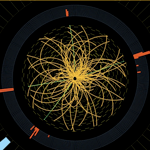 There are several different ways to study the nature of matter, but one of the most fun is to smash very tiny particles into each other at extraordinary speeds and see what happens.

This is what they do at CERN’s Large Hadron Collider (LHC) one of the largest, most complex, machines ever built. This $10 Billion proton beam smasher on the Swiss-French border was built for one main purpose: to determine if the Higgs boson actually exists. What is a Higgs boson?  Great question. Go to wikipedia and read about it.

Particle physics is not generally a pop-culture vocation.  But this week, particle physicists were all over the news.  It seems that there is a 99.99 percent chance that experiments at CERN have given us our first look at a particle that, according to a spokesperson, “is consistent with a Higgs boson as is needed for The Standard Model.”

Try to contain your excitement.

But, even if this new particle is not a Higgs boson, there is still good news.  It may be the first of a new type of massive subatomic particle that will completely alter our understanding of the universe.  So the news this week was win/win for scientists everywhere.

That said, scientists are pragmatic, so after saying “Thanks, nature!” Fabiola Gianotti, one of the CERN team leaders, told reporters that, “The Standard Model is not complete …” but, “the dream is to find an ultimate theory that explains everything – we are far from that.”

There is no practical use for a Higgs boson and we are not any closer to understanding gravity, nor dark energy, nor a unified theory of everything, so what have we learned from this 17 mile long, $10 Billion atom-smasher?

Well, first, we learned that there is a huge value to pure scientific research.  Science for its own sake can take us on a journey towards the answers to mankind’s oldest and most basic questions. And, although none of the scientists I spoke to would even venture a guess about the practical use of this discovery, I can’t help thinking that it is both inspirational and aspirational.

How many kids will start asking questions like, “What is everything made of?” or “Why do we need a theory of everything?”  How many adults will be inspired to learn about the forces of nature and the scientific method?  How many of us will aspire to learn all we can learn about the world around us, and our place in the universe?  I love these questions and the thousands more that will come from this remarkable discovery.

I also love the complexity of this particular problem and the technology, mathematics and computer science needed to solve it.  We may invent new kinds of math to help with this search, build new kinds of computers, rethink materials handling, change the nature of manufacturing or learn to do a thousand other things from the science needed to do this kind of research.  It’s simply awesome!

Get excited about this.  Read about it.  Tell your friends about it.  Think about it.  Who are we?  Why are we here?  What are we made of?  Why do things around us behave the way they do?  What is our ultimate fate?  What can we do to change the world?  There are so many more questions you can ask … so ask!  Congratulations to the teams at CERN. Striving to understand who and what we are may be our highest, best purpose.

PreviousHave you checked your computer to make sure you don't have the DNS Changer bug? NextAmazon’s Next Kindle Fire Will Ship in Q3 With Improved Display