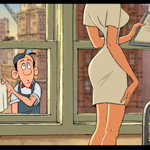 Edgar, a mild-mannered window washer, is daydreaming of the girl he loves. In his dream, they meet in a nightclub straight out of Casablanca, flirting from across the room. The scene, lovingly rendered in hand-drawn animation on an iPad, is controllable: By swiping your finger right or left, you can control the boldness of Edgar’s flirting. Swipe too hard and Edgar will gyrate wildly, causing her to recoil in terror. But swipe slowly, and Edgar will ease on the charm, pantomiming some smooth dance moves that win him the girl of his dreams. The Act, released last month for iOS, is a game with a remarkable history. Development on the game began over nine years ago and involved dozens of former Disney animators that had worked on films like Beauty and the Beast and Aladdin. Read the full story at Wired.