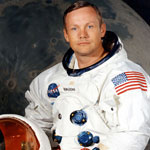 Neil Armstrong — who has died at the age of 82 — was best known as the commander of Apollo 11, but his career at NASA began nearly a decade earlier as a research test pilot. A trained aerospace engineer, Armstrong was a self-described “white-socks, pocket-protector, nerdy engineer” who worked at the cutting edge of flight test throughout the 1960s, flying everything from a hang-glider type aircraft towed behind a biplane, to a hypersonic rocket-powered airplane that flew to the edge of space. Read the full story at Wired.

PreviousApple's big win over Samsung -- what does it mean? NextAmazon, Motorola, Nokia Rush to Make News Ahead of iPhone 5