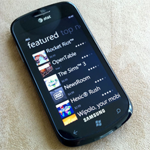 Microsoft has decided to stop publishing new apps for Windows Phone on Marketplace, while it addresses an issue that led to users experiencing problems with application downloads this week, the company said in blog post on Tuesday. The problem is related to an issue with the digital certificates that are used to sign apps. It has prevented users of phones that upgraded to Windows Phone 7.5, from an earlier version of the operating system, from installing or updating some apps during the last couple of days, according to the blog post. Read the full story at PC World.